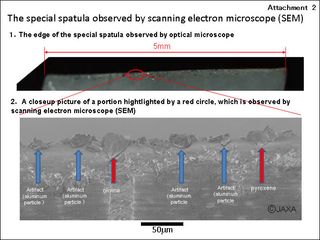 This scanning electron microscope image shows mineral particles from asteroid Itokawa (red) collected from a sample container from Japan's Hayabusa spacecraft, which visited the asteroid in 2005 and returned to Earth in June 2010.
(Image: © JAXA)

A Japanese spacecraft that touched down on a space rock during a billion-mile mission successfully returned the first ever samples from the surface of an asteroid, Japan's space agency said today (Nov. 16).

The samples are in the form of tiny dust grains collected directly from the asteroid Itokawa in 2005 by Japan's Hayabusa spacecraft, which returned to Earth in June. It was a 1.25 billion-mile (2 billion-kilometer) trip that took seven years to complete. [Photo of the asteroid samples]

The dust was found inside a sample return capsule that landed in Australia and was flown back to Japan for analysis.

"About 1,500 grains were identified as rocky particles, and most of them were judged to be of extraterrestrial origin, and definitely from Asteroid Itokawa," the Japan Aerospace Exploration Agency said in a statement.

JAXA scientists have known there were particles of material in the Hayabusa sample return capsule since July. But they were unsure if those particles were actually pieces of an asteroid, cosmic dust or contamination from Earth.

Now, they said, it is clear. The Hayabusa spacecraft collected samples of an asteroid.

"Being able to retrieve material from a celestial body beyond Earth was more than we had hoped for," Hayabusa project manager Junichiro Kawaguchi told Japan's Mainichi Daily News. "When the capsule returned, I said, 'Just having it return is like a dream,' so I don't know how to express this, which was beyond my dreams."

This graphic shows how the Hayabusa asteroid mission worked. Itokawa is a silicon-rich asteroid about 1,755 feet (535 meters) long at its longest side. It takes about 556 days to complete one orbit around the sun.

JAXA scientists used a scanning electron microscope to study the asteroid samples collected by Hayabusa. They found signs of minerals such as olivine, pyroxene and others, which matched remote-sensing observations taken by Hayabusa when it visited asteroid Itokawa.

Most of the particles are about 10 micrometers in size, roughly 1/10th the width of a human hair. They were found in one of two compartments inside the Hayabusa sample return capsule and must be handled delicately, JAXA officials said.

"JAXA is developing the necessary handling techniques and preparing the associated equipment for the initial (but more detailed) analyses of these ultra-minute particles," they added.

The fact that the Hayabusa spacecraft returned asteroid samples is the ultimate vindication for Japan's mission team.

JAXA launched Hayabusa (Japanese for "Falcon") in 2003. The spacecraft arrived at the asteroid Itokawa in 2005 while the asteroid was 180 million miles (nearly 290 million km) from Earth – almost twice the distance between our planet and the sun.

But Hayabusa experienced several crippling problems during the mission, including a fuel leak, communications breakdowns and malfunctions with its ion engines. The setbacks added an extra three years to Hayabusa's mission.

The probe was supposed to drop a lander on Itokawa, but the lander missed the asteroid's surface. Attempts to fire a projectile at the asteroid to kick up dust to be collected also failed.

Ultimately, JAXA directed Hayabusa to directly land twice on asteroid Itokawa in attempts to force some samples into its return capsule.

The Hayabusa spacecraft returned to Earth on June 13. Most of the craft burned up in Earth's atmosphere as planned during re-entry. Its sample return capsule, which was equipped with a heat shield and parachute, was ejected to make its own successful landing in the Australian outback and was later recovered.

"I'm filled with emotion and I can't believe it," Kawaguchi said. "A long period of hard work has paid off."

With the mission's success, JAXA has already begun planning a follow-up mission – called Hayabusa 2 – which would send a $200 million spacecraft to visit a carbon-rich asteroid. That mission is slated to launch in 2014, arrive at the asteroid in 2018 and return samples to Earth by 2020, JAXA officials have said.