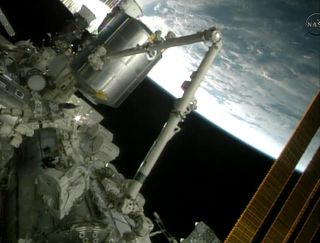 HOUSTON – The astronaut crew of space shuttle Discovery made a special delivery at the International Space Station today (March 1) by installing a new, and much-needed, extra storage room on the orbiting lab.

The astronauts used a robotic arm to attach the zero gravity closet, called the Permanent Multipurpose Module, to the bottom of the space station on an Earth-facing port of NASA's Unity node. The module's installation also marked another historic moment for the mission – it is the last NASA room to be attached to the multinational laboratory. [Gallery: Building the International Space Station]

"Leonardo is looking very happy to be in his or her new home," station astronaut Cady Coleman said.

The storage room, which is named Leonardo, measures 21 feet (6.4 meters) long and 15 feet (4.5 meters) wide. It will provide the station residents with over 2,470 cubic feet (70 cubic meters) of much-needed additional storage space.

The Leonardo module was one of three cargo-carrying Multipurpose Logistics Modules built for NASA by the Italian Space Agency. It's about the size of a small bus and weighs about 28,353 pounds (12,860 kilograms) when loaded with cargo.

Leonardo was delivered to NASA in 1998 and made its first spaceflight in 2001. This mission is its eighth and last trip to space. [Infographic: A New Closet for the Space Station]

By coincidence, flight controllers here at the station's Mission Control here at NASA's Johnson Space Center radioed the crew with a timely announcement: The space outpost was flying over Turin, Italy as the Italian-built module was bolted into place.

"It's a big day for us and for Italy," shuttle astronaut Mike Barratt said.

To outfit the Leonardo module for its permanent stay in space, engineers added some extra debris shielding, power systems and other gear.

The pressurized module is also arriving at the space station packed full of about 6,500 pounds (over 2,900 kilograms) of cargo. This includes one of the shuttle Discovery's most high-profile passengers – a dexterous humanoid robot that will become a permanent resident on the space station.

The robot, called Robonaut 2, hitched a ride to the station onboard Discovery and is part of a technology demonstration by NASA and General Motors to assess the potential role of robot assistants on the space station.

With the impending retirement of NASA's space shuttle fleet, the station will lose the enormous cargo-carrying capability of the orbiters. The last few shuttle missions are intended to stock up the station as much as possible before the shuttles are grounded.

But, a separate problem also exists on the space station:  After more than 10 years of being continuously inhabited by humans, the laboratory is running out of storage space. The extra storage module is expected to help with this problem.

Once the module is fully activated, the astronauts will also be able to use the space to conduct scientific experiments.

In addition to the storage room delivery today, Discovery's crew has a few other tasks to complete. The astronauts will start preparing for their mission's second spacewalk, which is scheduled to begin early tomorrow morning (March 2).

This story was updated to correct the volume of storage space in Leonardo.