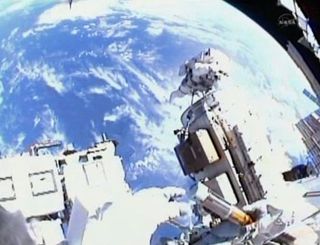 The view from spacewalker Alvin Drew's helmet cam shows him opening the "Message in a Bottle" to capture space.
(Image: © NASA TV)

Two astronauts working outside the International Space Station (ISS) today (Feb. 28) collected an unusual souvenir of their spacewalk: a bottle full of space.

Spacewalkers Stephen Bowen and Alvin Drew opened and "filled" a Japanese-designed metal cylinder with space, or rather the vacuum of outer space, and then sealed it to be brought back to Earth with space shuttle Discovery.

"Houston, if you agree, we're going to let Steve head back to the airlock and then we will be ready for... Message in a Bottle!" radioed spacewalk coordinator Nicole Stott as she started playing a recording of the song "Message in a Bottle" by The Police.

Taking more time to set up for photos of Drew opening the bottle than it did for him to actually open it, Drew kept his commentary to a minimum.

"Okay," he said simply after exposing the bottle to space. The activity came at the very end of a six and a half hour spacewalk devoted to space station maintenance.

Drew had a bit more to say about the activity before lifting off on the STS-133 mission.

"Oddly enough, being out there in space you got a better vacuum there than you get here on Earth with any kind of pump," he said during a pre-flight interview for NASA. "So, you really have a more perfect vacuum."

Not that this sampling of space was intended for science. Dubbed "Message in a Bottle," the activity was designed to be more symbolic than scientific.

"This investigation provides a chance for the participating astronaut to create a memento of his or her time in space but also a message for people on Earth," reads the official description of the "Message in a Bottle" as written by the Japan Aerospace Exploration Agency (JAXA). "Once the 'Message in a Bottle' is brought back to Earth and placed in people's hands, it'll become a conduit between humans and space, and between this world and the one beyond us."

Part of JAXA's Education Payload Observation designed to enlighten the general public about microgravity research and human spaceflight, "Message in a Bottle" is aimed at encouraging children to imagine what is possible.

"It is the brainchild of a scientist [and] renaissance man in Japan, who developed this idea to spur interest in space and expand kids' abilities to dream about what could be," former space station commander Douglas Wheelock told collectSPACE.com in an interview.

Wheelock had been scheduled to perform the "Message in a Bottle" activity during his stay in space last year, before the event was deferred to space shuttle Discovery's final mission, STS-133, now underway.

"Inside the canister is a glass bottle... We're going to bring it back to Earth with us and these Japanese scientists are going to fuse the glass together to make it an enclosed volume and then it is going to tour museums through the world as the "Message in a Bottle," explained Wheelock.

Astronauts who visited the space station have signed the outside of the metal cylinder, but the message inside the "Message in a Bottle" will be decided by those who see it.

"There is no message in there," said Wheelock. "They are going to encourage people — when this goes on tour — to approach this glass-enclosed bottle of space and write whatever message they would put in there to deliver to the rest of the universe."

Continue reading at collectSPACE.com to see more photos of the "Message in a Bottle."