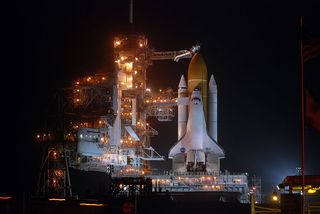 Today, Playstation users will have a unique opportunity to watch the final liftoff of NASA's Discovery Shuttle through PlayStation Home on their PlayStation 3 entertainment systems.

Users will be able to chat via Bluetooth headsets with others watching the launch - all from inside the PlayStation Home social gaming environment.

"The launch of the space shuttle Discovery provides a wonderful opportunity to introduce people to the fun of social viewing," said LOOT Managing Director David Sterling. "Users can share this experience with their friends, regardless of where those friends happen to be in the world."

Beginning at 1:50 pm Pacific Time, a live stream of the final liftoff of shuttle Discovery will be broadcast on the newly created NASA TV Channel of the LOOT Sunset Yacht (formerly known as the Amaterasu).

The shuttle Discovery will be delivering a humanoid robot and storage room and providing critical spare components to the International Space Station, on what will be the 35th shuttle mission to the station. It will be the 39th mission for Discovery, which made its first flight in 1984. [Space Shuttle Discovery By-The-Numbers]

"We're excited about this new way for people to experience the exhilaration of human spaceflight as part of a larger community," said David Weaver, NASA associate administrator for the Office of Communications. "In addition to the other two shuttle launches planned for April and June, NASA looks forward to sharing more of our endeavors with PlayStation users."

This article was provided by TechNewsDaily, a sister site of SPACE.com. Visit SPACE.com for complete coverage of Discovery's final mission STS-133.