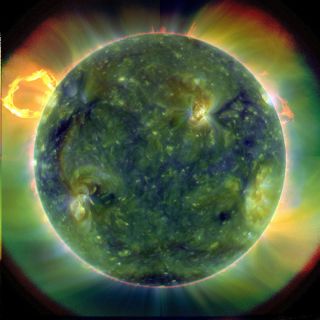 On Feb. 11, 2010, a sophisticated solar observatory was launched into space with a suite of instruments that would stare at the sun 24 hours a day, seven days a week. NASA's Solar Dynamics Observatory (SDO) promised unprecedented views of the sun, uninterrupted measurements of solar activity, and high- resolution images that showcase our parent star in spectacular detail.

It was a lot to promise, but exactly one year later, SDO has not disappointed.

In its first year on orbit, the observatory has beamed home images of massive solar eruptions blasting plasma into space, solar prominences being belched off the surface, and SDO's keen eyes have offered scientists unparalleled views of the sun's superhot atmosphere.

"It's overwhelming," Phil Chamberlin, SDO deputy project scientists at Goddard Space Flight Center in Greenbelt, Md, told SPACE.com. "The science is really ramping up and it's very exciting to find out all the capabilities of the instruments. The mission has definitely exceeded my expectations so far – and my expectations were high to begin with."

With SDO constantly gazing at the sun, the observatory's instruments are able to collect a wealth of information about our nearest star. The spacecraft records a new image every second, and transmits a staggering 1.5 terabytes of data to Earth every day.

But SDO is about more than just pretty pictures.

The main goals of the SDO mission are to study the sun's active regions, and the violent solar events that trigger effects in the Earth's upper atmosphere. Over the course of the spacecraft's five-year nominal mission, it will also observe the sun as it progresses through the 11-year solar cycle. These observations will help scientists better predict the sun's activity as it waxes and wanes over the cycle.

"One of the big studies SDO was designed for was to look at eruptive events, like solar flares, jets and spicules," Chamberlin said. "With the big eruptions, we're seeing every part of their evolution. We're able to see the buildup below the surface and how much output from the sun goes into the Earth's upper atmosphere. We're getting the complete picture for the first time. If there's an event on the sun, we see everything we need to see. There's no data gap."

When SDO launched a year ago, the sun's activity had been relatively quiet for several years — a period known as the solar minimum.

"We launched very close to the minimum. There had not been too much activity and we had not seen too many large flares," Chamberlin said. "The first flight images that we released were taken of activity as the sun awakened. It was like the sun was waiting for us to launch before it started popping off those solar flares."

Currently the sun is starting to wake up, and scientists are expecting solar activity to continue increasing to the solar maximum, which Chamberlin predicts should begin around 2013. As the sun's activity ramps up, SDO will be able to photograph active regions, record eruptions and solar flares, and watch for ancillary effects.

When the first stunning images from SDO were released, Richard Fisher, director of the Heliophysics Division at NASA Headquarters in Washington, called the views revolutionary. Fisher also said SDO's impact on heliophysics would likely be comparable to the impact NASA's prolific Hubble Space Telescope had on astrophysics.

But the comparison between SDO and Hubble reaches beyond aesthetics — both spacecraft have made an impact with the public.

"People are truly interested in these really cool images, but that also sucks them into the science," Chamberlin said. "People out there are enjoying the pictures, but they have also been really excited about the data and science we're getting from SDO. We do this for the scientists, and we love our jobs, but it's nice to know that we're reaching the public and this much larger community, too."

Another important part of SDO has been educational outreach. The mission's mascot is a rubber chicken, named Camilla Corona SDO, with a dynamic personality. Camilla keeps a blog and is active on Facebook and Twitter as a way of reaching out to the public about the SDO mission and its science findings.

To celebrate the spacecraft's first anniversary, Chamberlin will join other scientists and engineers for a party at Goddard to thank everyone involved in the mission.

It will also be a time for the scientists and engineers to reflect on the events of the past year.

"There's definitely been a lot of reminiscing," Chamberlin said. "It's been fun to follow the timeline again and say, exactly a year ago, this is what we were doing. It was such an exciting and nerve-wracking time — a lot of work had gone into SDO, and there we were putting it on top of this huge, controlled explosion. But now today, the mission has just been phenomenal."