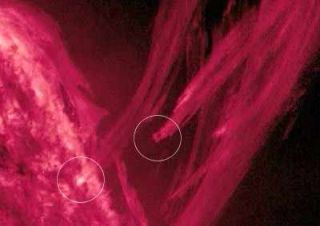 This image depicts coronal rain. Encircled are two plasma streamers, one hitting the sun's surface and another incoming behind it.
(Image: © SDO/AIA)

A massive eruption on the surface of the sun that sent tonsof plasma raining down our nearest star has been caught on camera by NASA's newsolar observatory.

The huge solar eruption was recorded by NASA's SolarDynamics Observatory (SDO) and announced less than a week after the spaceagency released the space telescope's firstimages.

The aftermath of the eruption, which occurred on April 19, canbe seenin video from the sun-watching observatory.

"SDO has just observed a massive eruption on the sun ? oneof the biggest in years," said Lika Guhathakurta of NASA headquarters inWashington, D.C. "The footage is not only dramatic, but also could solve alongstanding mystery of solar physics."

The movie spans four hours of actual time while observingthe eruption in a view that spanned about 62,137 miles (100,000 km) of linearspace.

"It's huge," said Karel Schrijver of LockheedMartin's Solar and Astrophysics Lab. In fact, the entire planet Earth could fitbetween the plasma streamers with room to spare.

Astronomers have seen eruptions like this before, but rarelyso large and never in such fluid detail.

"We can see a billion tons of magnetized plasmablasting into space while debris from the explosion falls back onto the sunsurface. These may be our best data yet," Schrijver said.

Schrijver says his favorite part of the movie is the coronalrain: "Blobs of plasma are falling back to the surface of the sun, makingbright splashes where they hit," he explained. "This is a phenomenonI've been studying for years."

Coronal rain has long been a mystery. It's not surprisingthat plasma should fall back to the sun. After all, the sun's gravity ispowerful. The puzzle of coronal rain is how slowly it seems to fall.

"The sun's gravity should be pulling the material down muchfaster than it actually moves. What's slowing the descent?" Schrijver said.

SDO is beginning to answer this question for the first time.

"The rain appears to be buoyed by a 'cushion' of hotgas," Schrijver said. "Previous observatories couldn't see it, but itis there."

Rain on the sun

SDO was also able to take the temperature of the coronalrain.

Using an array of ultraviolet telescopes called theAtmospheric Imaging Assembly (AIA), the observatory can remotely measure thetemperature of gas in the sun's atmosphere. NASA launched the SDO spacecraft inFebruary to take unprecedented HD-quality images and videos of the entire sun.

Coronal rain turns out to be relatively cool ? "only"about 107,000 degrees Fahrenheit (60,000 Celsius). When the rains falls, it issupported, in part, by an underlying cushion of much hotter material that has atemperature between 1.8 million and 4 million F (1 million and 2.2 million C).

"You can see the hot gas in the color-coded temperaturemovie," says Schrijver. "Cool material is red, hotter material isblue-green. The hot gas effectively slows the descent of the coronalrain."

Dick Fisher, the head of NASA's Heliophysics Division inWashington DC, has been working in solar physics for nearly forty years."In all that time," he says, "I've never seen images likethis."