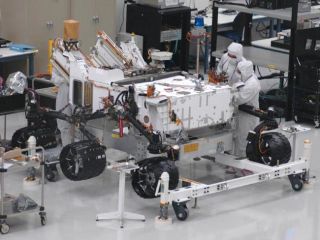 Mars rover Curiosity, the centerpiece of NASA's Mars Science Laboratory mission, is coming together for extensive testing prior to its late 2011 launch. This image taken June 29, 2010, shows the rover with the mobility system — wheels and suspension — in place after installation on June 28 and 29.
(Image: © NASA/JPL-Caltech)

Jim Green, director of NASA's Planetary Sciences Division in the U.S. space agency's Science Mission Directorate here, attributed the 3 percent cost increase to problems developing the mobility systems, avionics, radar and drill for the truck-sized rover, which is formally known as the Mars Science Laboratory Curiosity, and as MSL for short. Delays in completing the rover's Sample Analysis at Mars instrument suite, which is designed to sniff the surrounding air for carbon-containing compounds, also added to its cost.

"Our problem right now is MSL," Green told members of the NASA Advisory Council's planetary sciences subcommittee during a public meeting here Jan. 26. "It has virtually no unencumbered reserves left."

With MSL slated for delivery to Florida's Cape Canaveral Air Force Station in June, Green said it is imperative that the program's funding reserves be restored in order to gird against any further development or test problems that could cause the rover to miss an unforgiving three-week launch window that opens Nov. 25.

MSL's price tag has grown by more than $660 million since 2008, according to a February 2010 audit by the U.S. Government Accountability Office, which attributed much of the increase to a 68 percent rise in hardware development costs since the program's 2003 inception.

Although NASA had planned to launch MSL in 2009, technical setbacks forced the agency to postpone the mission two years, the minimal delay for any Mars-bound craft missing its launch window.

Postponing MSL's launch again, Green said, is not an option.

Green said the situation is especially dire given that MSL is one of three NASA planetary missions launching this year.

The Juno mission to Jupiter is slated to launch in August, followed a month later by the Gravity Recovery and Interior Laboratory (GRAIL), a Discovery-class mission to fly a pair of spacecraft in tandem around the Moon to measure and map variations in the lunar gravitational field.

Given the inflexible nature of most planetary launch windows, Green said his top priority this year is to guard against scheduled slips that would cause multiyear delays and cost his division hundreds of millions of dollars. He said lawmakers on Capitol Hill were recently notified of the MLS funding increase, and that NASA had already set aside $12 million in division funds left over from last year to help shore up program reserves.

Another $23.3 million is needed for MSL through the end of summer, and another $46.3 million for the last two to three months before launch, Green said.

However, finding the additional money could prove challenging in the current budget environment.

Although NASA's Planetary Sciences Division had been slated for a 10 percent annual increase, to $1.49 billion, in 2011, Congress has yet to adopt a spending plan for the federal government this year, leaving NASA and other agencies operating at last year's spending levels under a continuing resolution approved in December.

In addition, Republican leaders in the U.S. House of Representatives are proposing to roll back discretionary spending even further, to 2008 levels, for most federal agencies, including NASA.

Green said the continuing resolution under which NASA will operate through at least March 4 gives the division $144 million less than the White House proposed for the current budget year, including a $115 million shortfall in the division's Mars program, which is managed by the Jet Propulsion Laboratory (JPL) in Pasadena, Calif.

Still, Green said his division is prepared to look internally for resources to cover the MSL cost growth, starting with JPL and the roughly $400 million budgeted for Mars exploration programs under the continuing resolution.

"The program office is on notice that they'll have to skinny down," Green said. "We have little flexibility to cut back our operating missions … although there is some. We'll have to see what's operating that should move on."

NASA's Spirit rover, for example, has been operating as a stationary science platform since getting stuck in a sand trap more than a year ago. The tiny rover's 90-day primary mission ended in 2004.

Green said it is possible that the MSL cost increase could have an impact on non-Mars programs, and he did not rule out the potential to cancel approved missions currently under development.

However, even if Congress were to rollback NASA's budget to its 2008 level — $17.3 billion versus the $19 billion requested for this year — the planetary division could probably scrape by without killing programs.

"I believe we can close the problem … without canceling anything, but I don't know that for a fact," he said, adding that cancellation of the division's Lunar Atmosphere Dust Environment Explorer, a satellite slated to launch in 2012 that will orbit the moon to determine the global density and composition of the lunar atmosphere, could be in the offing. In addition, the division could cancel missions in development under its New Frontiers and Discovery programs.