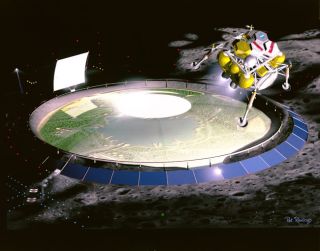 This illustration shows a lush green land on the moon inside a crater covered by a dome to protect and feed lunar astronauts while siphoning elements from the moon's regolith.
(Image: © Pat Rawlings/NASA)

Humans may not revisit the moon again until possibly 2020 at the earliest, but plenty of countries and private companies have targeted Earth's rocky satellite as a prime destination for robotic explorers.

The last century's moon race between the United States and Russia has since given way to a new onslaught of unmanned lunar missions launched by Europe, Japan, China, India and the United States, which have helped uncover lunar water resources. Private entrepreneurs are also racing to land a homemade robot on the moon and win the $30 million Google Lunar X Prize, which will reward the first private team to launch and land a spacecraft on the moon.

Stirrings of a new manned lunar race between the U.S. and Chinese space programs died with the cancellation of NASA's Constellation program at the end of last year. China now looks like the "clear front- runner for reaching the moon," despite not yet officially announcing a human lunar program, according to Joan Johnson-Freese, a space policy analyst at the Naval War College in Newport, R.I.

"Since the political will was clearly not evident in the U.S. to fund our lunar program to the extent necessary for success, it put the U.S. in a position of racing back to a place we had been, in a race we had won triumphantly before, with the very real risk of coming in second this time," Johnson-Freese said in an e-mail. "While very disappointing, I think reality dictated the cancellation."

NASA has not completely given up on the moon and lunar science despite redirecting human mission plans toward the asteroids and Mars, according to officials. But its present path seems unlikely to follow the Apollo moon program's footsteps as closely as the Constellation plan did.

Send in the bots

Meanwhile, China has pushed forward with a three-phase lunar exploration program involving probes and a lander. Its human spaceflight program has so far focused on launching to Earth orbit and preparing to build a Chinese space station starting this year.

The country's second moon probe, Chang'e-2, entered lunar orbit at the beginning of this month after a five-day trip from Earth. Part of Chang'e-2's mission involves scouting possible landing sites for the Chang'e-3 spacecraft, which is scheduled for a lunar landing in 2013.

Plenty of other countries seem eager to join in the lunar rush, even if China looks set to take a strong lead. India has begun drawing up plans for its own second lunar probe launch in 2013, after the success of its Chandrayaan 1 probe, which helped confirm the presence of water on the moon.

The moon race may act as an extension of a China-India rivalry that has spilled over from Earth to human spaceflight and the development of military technologies for space.

"India in particular has been smarting from the techno-nationalist rewards that China has reaped from its space successes, and has seen China build its military space capabilities, and so jumped on that bandwagon," Johnson-Freese told SPACE.com.

The European Space Agency has its own ideas for establishing a lunar presence. It awarded $8.4 million to Europe's biggest space corporation, EADS Astrium, to design a lunar robot that could rove near the lunar south pole.

Japan has targeted a research robot for the moon with a landing date around 2015. And a private Japanese consortium hopes to send along some company in the form of a two-legged humanoid robot designed to walk on the moon, even if it faces funding and engineering challenges.

In an added 21st century twist, private U.S. companies have joined in the race for the moon with the $30 million Google Lunar X Prize up for grabs. Twenty-two teams are competing to land a robot on the lunar surface, have it move at least 1,650 feet (500 meters), and transmit data and images back to Earth.

But the private companies aren't going it alone. NASA recently signed contracts to buy moon data from six of the private teams competing for the Google Lunar X Prize.

"There's a synergy there, working with NASA and going to the moon," said Brett Alexander, president of the Commercial Spaceflight Federation.

The private space industry could use the Google Lunar X Prize as a stepping stone to develop techniques that could also apply to asteroid missions and harvesting minerals, Alexander told SPACE.com. Companies could then position themselves to offer their services to NASA or other government space agencies.

That's the future. For now, the moon awaits its next visitor.