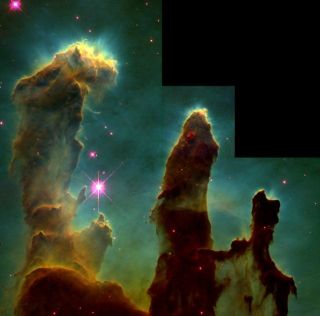 Welcome to the new SPACE.com. Here, take a look at the Hubble Space Telescope's iconic view of the Pillars of Creation in the Eagle Nebula.
(Image: © J. Hester/P. Scowen/ASU/HST/NASA)

Since our launch in 1999, millions and millions of people have joined SPACE.com on a journey to the great beyond as we report live on launches, bring you 24/7 coverage of spacewalks and robotic missions, describe discoveries from astronomy conferences, chronicle the developing private space revolution, and share in the excitement of meteor showers, eclipses and other skywatching events.

We’re a bunch of space geeks and science enthusiasts, and we’ve been having a blast. Now we’re going to kick this whole mission into high gear.

Over the past year, we’ve hired additional reporters and support staff and expanded our coverage of the changes at NASA, the future of commercial spaceflight, military space, astronomy and science, and what’s up in the night sky. More people than ever are visiting the site — 5 million in December alone.

And we’ve been listening to you. We know you want bigger pictures and more of them, broader coverage and more analysis. And we hear loud and clear that many of you want to be more involved in the conversation.

So we’ve redesigned the site with all this in mind. We sought formal input from a handful of longtime participants in the SPACE.com community and factored in the many requests that have rolled in over the years. We’re extremely excited about the new features, improved navigation, and the overall new look. Additional features will roll out in coming weeks as we devote ongoing resources (IT and design people) to continue improving the site’s look and functionality as our reporting also expands.

Here’s a snapshot of what you can expect:

Join the Conversation: The new design gives community and social networking functions greater prominence and allows easier access to our writers. Facebook, Twitter and other social media will play bigger roles in our overall effort to deliver information to you wherever you are.

Bigger photos: No single reader request has been repeated more often: “Please give us bigger photos!” We’re excited to make this happen.

More Infographics: Words are great, and we love images. But sometimes the best way to explain things is with explanatory infographics. Not only are we pouring more resources into making them, but we’ve set up an easy-to-find archive so you can peruse them all.

New Wallpapers: It’s been ages, frankly, since we added new wallpapers. We’re going to get serious about offering up new ones all the time now.

More Night Sky Features: Whether you have a huge telescope or just like to go out and look up now and then, we've ramped up our skywatching coverage, with our own growing staff assisting our two weekly columnists — Joe Rao and Geoff Gaherty — to explain what’s up there and how to find it.

More Insightful Coverage: This week’s series of articles on the argument for and against going to the moon is a taste of what our new, larger team can do. As we do a better job reporting the news, we’ll also be digging deeper and analyzing the big picture of the space program, both public and private.

We want to continue the journey together, so we’re renewing our commitment to engage the whole space community in the ongoing dialogue of discovery and exploration. Let’s begin by introducing our growing staff:

Denise Chow, Staff Writer, joined us last year. Denise has a master's degree in journalism from New York University and a bachelor's degree from the University of Toronto. She is from Canada and is constantly suppressing her inner Wookie. @denisechow

Michael Wall, Senior Writer, joined us last year and works out of San Francisco. He has a Ph.D. in evolutionary biology from the University of Sydney, Australia and a bachelor's degree from the University of Arizona. He was a writer at the Idaho National Laboratory, and he’s worked as a herpetologist and a wildlife biologist. Mike is in Seattle this week covering the 217th meeting of the American Astronomical Society. @michaeldwall

Jeremy Hsu, Senior Writer, rejoined us last year. Jeremy has a master's degree in science journalism from New York University, and completed his undergraduate education in the history and sociology of science at the University of Pennsylvania. He has written for publications such as Popular Science, Scientific American Mind and Reader’s Digest Asia. He also writes a lot for our sister sites, LiveScience and TechNewsDaily. @ScienceHsu

Clara Moskowitz, Senior Writer, has a bachelor's degree in astronomy and physics from Wesleyan University and a graduate degree in science journalism from the University of California, Santa Cruz. Clara grew up wanting to be an astronaut, but now spends a lot of time at Cape Canaveral covering launches for us, or heading off to conferences to get the latest scoop on the growing business of commercial spaceflight. @ClaraMoskowitz

Tariq Malik, Managing Editor, has been with SPACE.com since 2001 and is the duct tape that keeps this ship together. Tariq was a staff reporter for The Los Angeles Times and has journalism degrees from the University of Southern California and New York University. You should see his desk – piled high with space books and memorabilia and interview notes that must be impossibly lost. @tariqjmalik

Dave Brody, Executive Producer, Video, is our in-house video documentarian, on-camera explainer of astrophysics and space commercialization and was married on the seafloor. Really. He’s been with SPACE.com since 1999. @davidskybrody

Robert Roy Britt, Editor in Chief, has been with SPACE.com since 1999 and started as a writer. Not a day goes by when he doesn’t wish he were still writing full time. @robertroybritt

Also in recent months we’ve added copy editors, producers, an infographic artist, and beefed up our video production team.We also enjoy contributions from a host of talented freelance writers, including longtime Space Insider Leonard David, who has been writing for us since 1999.

We're bullish on space. And while the new design aims to showcase all the content, we’re mindful that you count on SPACE.com for professional, quality journalism and serious analysis of the issues, plus some fun. With this new design and additional improvements ahead, we all pledge to make SPACE.com’s content better than ever, as we rediscover of our old slogan: Something Amazing Every Day.

UPDATE: Several long-time visitors have complained that the new Comments function doesn't allow signing in via the old SPACE.com logins. We are looking at a possible solution to restore that capability, but we're not certain yet if we can. We're also working to improve some other aspects of the new functionality, and we appreciate all the suggestions.

Comments? We’d love to hear from you below, or you can e-mail the Managing Editor here.