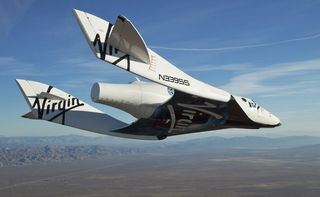 This year was a big one for spaceflight, with governmental

During this watershed year, for example, NASA changed course

Here's a brief rundown of the top six spaceflight

The first live-in crew arrived at the International Space

The fact that humanity has an established, decade-long presence on a space

Assembly of the station began in 1998 and is almost

NASA plans to operate the space station until at least 2020.

For years, engineers have dreamed about powering a craft

Ikaros lifted off on May 20 along

Ikaros is demonstrating the

Japan's space agency, for example, is planning to launch a

Three of the last-ever space shuttle missions lifted off

All of the 2010 shuttle missions delivered key parts and

The STS-131 mission of the shuttle Discovery launched April

Discovery was supposed to make another trip to the station

Virgin Galactic founder Richard Branson publicly unveiled SpaceShipTwo in December 2009. In March 2010, it made its

Next up is a powered test flight, giving SpaceShipTwo

NASA will need help getting cargo to the space station after

The California-based company lifted its Dragon capsule into

The mission was the first test flight under NASA's

Dragon's next test flight could take it directly to the

Gone, for example, is the Constellation program, which aimed

In the short term, Russian Soyuz spacecraft will ferry cargo

NASA would then be free to concentrate on more ambitious