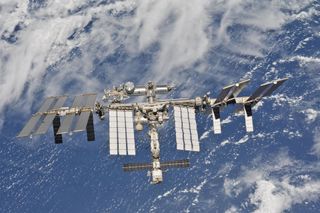 The International Space Station pictured from a Soyuz spacecraft on Oct. 4, 2018. As spaceflight advances, the question has arisen: if a crime is committed in space, for example aboard the space station, who would investigate it and how would it be handled?
(Image: © NASA)

Recent claims of a possible space crime aboard the International Space Station raise the question: Who investigates a crime in space?

No country or political entity owns space. State lines and political boundaries do not extend past the planet's atmosphere. So then, what jurisdictions would come into play to investigate allegations of a space crime or handle a conviction, should evidence show that a crime in space had, in fact, been committed?

Article VIII of the 1967 Outer Space Treaty states, "A State Party to the Treaty on whose registry an object launched into outer space is carried shall retain jurisdiction and control over such object, and over any personnel thereof, while in outer space or on a celestial body."

In other words, if a crime is committed on a craft belonging to a specific nation, that nation would have legal jurisdiction in the case and therefore investigate the person who committed the crime. However, things get a little trickier concerning astronauts aboard the International Space Station, since the orbiting lab doesn't belong to a single nation or house astronauts from a single space agency.

So, in theory, the spot on the space station a crime was committed could inform jurisdiction, Frans von der Dunk, a space lawyer and professor of space law at the University of Nebraska-Lincoln, told Space.com.

An intergovernmental agreement (IGA) created guidelines for cooperation between nations that would coexist on the station. The agreement was signed by Canada, the European partner states (Belgium, Denmark, France, Germany, Italy, the Netherlands, Norway, Spain, Sweden, Switzerland and the United Kingdom), Japan, Russia and the United States in 1998. According to the IGA, each country is expected to exercise criminal jurisdiction over personnel from its respective nation. So, for example, the United States would investigate a crime committed by a NASA astronaut.

The criminal allegations made against a U.S. astronaut this past week illustrate "the complexity of the legal framework which may apply," Neta Palkovitz, a lawyer and legal adviser specializing in space law and policy, told Space.com in an email. If both people involved in the alleged crime are "Americans by nationality, then the IGA doesn't help much, since the crime does not concern any other ISS partner State. It becomes a pure US- domestic legal affair, and as a NASA Astronaut using a NASA computer for the alleged crime, NASA should be the first to investigate what happened."

Although these regulations have been in place for years, the claim reported this past weekend marks the first time that a crime is alleged to have been committed in space, according to The New York Times. The accusation is "really a novelty in the sense that, for the first time, you have someone doing something in space, or more precisely from space, that could raise criminal issues," von der Dunk said.

As human spaceflight advances to Mars or to long-duration lunar settlements, legal issues will be more likely to arise again in space. At that point, the already-murky waters of addressing space crime will become even less clear. It is possible, then, that as we venture out farther into the solar system for longer periods, we will need to further develop regulations and guidelines surrounding criminal jurisdiction in space.

For a lunar or Martian colony, criminal jurisdiction would at first "use what we currently have as the baseline," von der Dunk said. So a U.S. astronaut flying to Mars on a U.S. spacecraft would be subject to U.S. jurisdiction. But things would get more complicated as more people came to the moon or Mars and humans began spending more time on these bodies.

For example, if a person flies to the moon, "step[s] out of the lunar module, send[s] it back and stay[s] for four years longer on the moon, they are no longer personnel on the spacecraft," von der Dunk said. So, while such an individual would have been considered under U.S. jurisdiction because they flew aboard an U.S. vehicle, would this still apply once they no longer worked or lived on that craft?

Additionally, "space law has a peculiar twist, because this jurisdiction applies to space objects, and space objects are seen as something launched by humans into outer space," von der Dunk said. So, if humans manufacture homes out of local material on the moon or Mars, would jurisdiction change because astronauts would no longer be in a habitat or craft from an Earth nation?

This is "all, of course, conjecture and hypotheticals and looking into a crystal ball," von der Dunk said. But, he added, the ways that space law may change as human spaceflight advances are "interesting enough to start thinking about it."

Space law will also have to evolve as not just astronauts, but space tourists, launch to space. We will need additional regulation and legal frameworks "when space tourism becomes a commercial reality," Palkovitz said. "Most of the international laws we have now apply to Astronauts but it is not very clear to which extent they may apply to private persons in a commercial human space flight context."

"In fact," Palkovitz added, "it is still unclear where outer space actually is in the legal sense. This is why we still deal with questions like what is the applicable legal framework to commercial sub-orbital flights. These kind of issues would have to be clarified in the near future, before we send people to live on the Moon or Mars."

These questions will be especially difficult to navigate if a violent crime ever occurs on Mars or another extraterrestrial destination. Crime scene analysis on Mars or the moon would have to be altered from Earth procedures, as variables like blood spatter will look drastically different at those sites, due to the lower gravity. Additionally, since it is much more difficult for humans to survive on a planet like Mars, convicting a theoretical space criminal of murder might prove to be especially tricky.

"If you don't have judges and police on the moon, it will probably mean that you will have to provide some commander of a return vehicle with police powers to take that person in custody and bring him down to Earth," von der Dunk said. But, he added, on Mars that might not be an option.

"If something like that happens on Mars … it's primarily within the interest of the local community to make sure that justice is done," von der Dunk said. Again, while this is all conjecture, future Martian communities might deal with criminal claims on their own. "These people on Earth have no clue what it means to live on Mars," he said, imitating what a future Mars-dwelling astronaut might say. Future Martian colonies "will establish their own pragmatic legal regime to start dealing with these issues."

However, von der Dunk added, future Martian or lunar colonies might not take criminal matters into their own hands while they still depend on supplies and support from Earth, because they would need to maintain that relationship to survive.

The criminal allegations made this past weekend are far less grisly and confusing than a Martian murder. McClain's estranged spouse, Summer Worden, has claimed that the astronaut accessed Worden's bank account while aboard the space station. The investigation of these alleged events continues to unfold as the two undergo a separation.