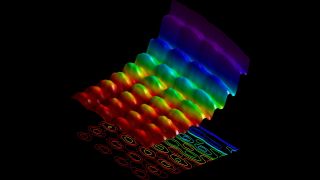 Light behaves as both particles and waves at the same time, and scientists have been able to observe this duality in action using an ultrafast electron microscope. The wave nature is demonstrated in the wavy upper portion, while the particle behavior is revealed below, in the outlines showing energy quantization.
(Image: © Fabrizio Carbone/EPFL)

Is it a wave, or is it a particle? This seems like a very simple question. Waves are very distinct phenomena in our universe, as are particles. And we have different sets of mathematics to describe each of them. So, if we want to go about describing the entire universe, this appears to be a very handy classification scheme — except when it isn't. And it isn't in one of the most important aspects of our universe: the subatomic world.

When it comes to things like photons and electrons, the answer to the question "Do they behave like waves or particles?" is … yes.

Related: Antimatter Is Both a Particle and a Wave, New Experiment Confirms

At first glance (and even at deeper glances), waves and particles are very different. A particle is, as best as I can put it, a thing. It's a small, single, finite object. You can hold a particle in your hand. You can throw a particle at someone else and watch it bounce off of them. It's localized. You can point to a particle and say, "Look, the particle is right there, exactly where I'm pointing."

Particles have momentum and positions. Particles will move in straight lines until something changes their direction. Particles can bounce off of other particles, and they can change trajectories. Think of bullets or speeding cars. They’re not literally small, subatomic particles, but they act like particles when they hit other things.. Many physical interactions can be described simply as particles bouncing off of one another.

On the other hand, waves are almost completely different. They're not localized. If you want to indicate where a wave is, you have to move your hands around vaguely gesturing, saying, "It's all over there." You can't hold the wave in your hand. Instead, the wave passes over, around or even through your hand.

Waves are oscillations, meaning they wiggle. They transport energy from one place to another. Waves don't really bounce off of, but instead interfere with, one another. Sometimes, when the waves come together just right, crest meet crests, and you get double waves. This is called "constructive interference." But sometimes, the waves cancel each other out, and you get nothing at all — an interaction known as "destructive interference." Waves can turn corners, and when they pass through narrow openings, they can fan out, or diffract. There are many types of waves in our universe, like ocean waves and waves on a Slinky.

Both waves and particles are described by very, very different sets of mathematical equations. So, if you want to describe something scientifically, first you have to decide if it's a wave or a particle; then you can pull out the correct mathematical tools to make predictions about how it will behave and act. And for a couple hundred years, this line of thinking was a fine approach to solving all the physics problems in the world.

Light is a wave … and a particle

The problems with this approach started with light itself. In the early 1800s, the English scientist Thomas Young played some games with light by shining some beams through two narrow openings onto a screen behind them. What he found was a classic interference pattern with stripes of varying intensity on the screen. This is exactly what water waves would do when passing through two narrow channels. Some of the light waves would add together, and some of the waves would cancel out, leaving a striped pattern on the back screen. This is pretty solid evidence that light acts like a wave, because this is exactly what waves do.

Then, in the late 1800s, German theoretical physicist Max Planck threw a monkey wrench into everything when he studied blackbody radiation. To explain his observations, he proposed that light can be emitted only in discrete little chunks. A few years later, Albert Einstein threw his weight into the matter by studying the photoelectric effect, and proposed that not only is light emitted in little chunks, but light itself is made of little packets of energy called photons. In other words, light was behaving as a particle in these experiments.

Matter is a wave … and a particle

In the 1920s, a young physicist named Louis de Broglie made a radical suggestion: Since light has energy, momentum and a wavelength, and matter has energy and momentum, maybe matter has a wavelength, too. That's something that's easy to say but hard to wrap your head around. What does it mean for matter to have a wavelength? Or was de Broglie just horribly mistaken?

It turns out that de Broglie nailed it. At first blush, you may wonder how electrons could be anything but particles, because you can literally hold them in your hand, and they do a lot of bouncing. When you shoot electrons through two slits, you end up with the exact same interference pattern that you do with lights: alternating vertical stripes of more and fewer electrons.

What's going on? Electrons are acting like waves when they don't look anything like waves. What's doing the waving?

The answer comes through quantum mechanics, and describing that answer involves interpreting some of the deep mathematics. The most common picture, called the Copenhagen interpretation, says that the wave that we associate with matter is a wave of probability representing all the possible places where a particle might be the next time we go looking for it. This range of probability is described by an equation that has the same mathematical bones as that of any other wave equation. In this picture, that's what's doing the waving: the possible places the particle could be.

So, as the electrons pass through the slits in de Broglie's experiment, they can't exactly decide where they want to be. Those waves of uncertainty crash into each other and interfere, merging and canceling each other out just like any other waves. Then, when an electron's wave hits the back screen, the particle finally has to decide where to land. Slowly, electron by electron, the wave pattern builds up.

Just like light, sometimes matter acts like a particle, and sometimes, it acts like a wave. So, are light and matter made of waves or particles? The answer is both, sort of.

Learn more by listening to the episode "Is everything a wave or a particle, and why does my head hurt?" on the Ask A Spaceman podcast, available on iTunes and on the web at askaspaceman.com. Thanks to Rowan H., Ethan L., Broc P., Madhab D., Grisham J., Jeff G., Cortney H., Joshua Z., @shrenicshah, Mike D., Lynn R., A C, Rick S., Robert P., and @ShaunFosmark for the questions that led to this piece! Ask your own question on Twitter using #AskASpaceman or by following Paul @PaulMattSutter and facebook.com/PaulMattSutter.