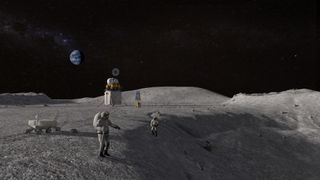 An artist's concept of astronauts working on the moon.
(Image: © NASA)

Returning American astronauts to the moon in 2024, and then sending pioneers on to Mars in the next decade, remains a top priority for the Trump administration, Vice President Mike Pence stressed.

"The president has made it clear that we're going to accomplish this goal by any means necessary," Pence said Wednesday (Feb. 19) during a speech to employees at NASA's Langley Research Center in Virginia.

"In order to succeed, we are going to continue to focus on the mission over the means," added Pence, who also chairs the policy-steering National Space Council. "We want to challenge each one of you here at Langley: Consider every available option and platform to meet our goals, including industry, government — the entire American space enterprise."

Related: Presidential visions for space exploration: From Ike to Trump

In December 2017, President Donald Trump signed Space Policy Directive-1, which officially instructed NASA to work toward returning people to the moon for the first time since 1972, and to use Earth's nearest neighbor as a stepping-stone to Mars.

The original timeline targeted 2028 for the crewed return, which will send two astronauts, including the first-ever female moonwalker, to the lunar south pole. But in March of last year, Pence announced a significant acceleration, directing NASA to aim for 2024 instead.

The agency is also working toward ambitious timelines farther out. For example, NASA aims to establish a sustainable, long-term human presence on and around the moon by the late 2020s and to put boots on Mars sometime in the 2030s.

Three big pieces of infrastructure are key to the moon plan, which NASA is pursuing via a program called Artemis: the Orion crew capsule, the Space Launch System (SLS) megarocket and the Gateway, a small, moon-orbiting space station that will serve as a hub for lunar surface operations and sorties.

Orion made an uncrewed test flight to Earth orbit in December 2014, but the SLS still hasn't gotten off the ground; development of the huge rocket has been beset by delays and cost overruns.

The first SLS flight — an uncrewed test mission called Artemis 1, which will send Orion around the moon — is expected to take place sometime next year. The crewed Artemis 2 mission, another lunar flyby, is targeted for late 2022. Artemis 3 is the 2024 surface mission.

Pence didn't mention the SLS issues in Wednesday's speech. But he did highlight the progress being made in the private spaceflight sector, noting that SpaceX is poised to launch NASA astronauts to the International Space Station sometime this spring. (The California company holds a $2.6 billion NASA contract to fly six operational crewed missions to the orbiting lab using its Crew Dragon capsule and Falcon 9 rocket.)

The vice president repeatedly praised the "incredible entrepreneurial energy" in American spaceflight and stressed that NASA should tap that resource to the extent possible.

"We encourage you to reach out, to engage them [private-sector employees] in every appropriate way to help us achieve our mission," Pence told the Langley crowd. "Keep building on the partnership that the American space program has always been in this country."