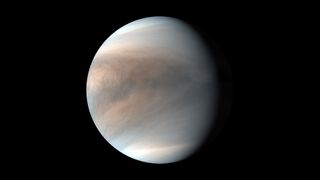 The mystery behind why the atmosphere of Venus spins much faster than the planet's surface may finally be solved, a new study finds.

The finding might help shed light on how habitable distant exoplanets, or worlds beyond our solar system, may actually be, researchers said.

Compared to Earth, Venus twirls at a leisurely pace on its axis, with its surface taking 243 Earth days to complete one rotation. However, the hot, deadly atmosphere of Venus spins nearly 60 times faster than its surface, whirling around the planet once every 96 hours, an effect known as super-rotation.

Related: The 10 weirdest facts about Venus

This mysterious phenomenon of atmospheric super-rotation is seen not just on Venus, but also on Saturn's largest moon, Titan. Previous research suggested that in order for this super-rotation to occur, the atmosphere of Venus has to possess enough angular momentum — the amount of momentum a body has because of its spin — to overcome friction with the planet's surface. However, it was uncertain what exactly the source of this angular momentum was.

To shed light on this mystery, scientists analyzed data from the Japanese space probe Akatsuki, which has orbited Venus since 2015. They focused on super-rotation in the cloud layer of Venus, where the rotation speed is highest, reaching about 245 mph (395 km/h) in the region surrounding the equator.

Based on ultraviolet images and thermal infrared data from Akatsuki, the scientists developed a way to track Venusian cloud motions in order to map the planet's winds and the way heat circulated in the atmosphere. This helped give the researchers a picture of how angular momentum was distributed across the cloud-top level, located at about 42 miles (70 kilometers) in altitude. This in turn helped them estimate the forces sustaining the super-rotating atmosphere.

"Personally, our success at doing so was my biggest surprise," study lead author Takeshi Horinouchi, a planetary scientist at Hokkaido University in Sapporo, Japan, told Space.com.

The scientists discovered the Venusian atmosphere received angular momentum though thermal tides, which are variations in atmospheric pressure driven by solar heating near the planet's equator. They also found planetary-scale waves in the atmosphere as well as large-scale atmospheric turbulence worked against this effect from thermal tides.

"There was a suggestion that thermal tides might be contributing to the acceleration behind super-rotation, but I think the mainstream assumption was different, so this was a surprise," Horinouchi said.

These findings may shed light on the habitability of tidally locked exoplanets — worlds that each have one dark side that always faces away from its star and one side that is bathed in constant sunlight. One might expect the daysides of these exoplanets would be hot and the nightsides would be cold, and that conditions for life as we know it might be most favorable in the twilight zone between these sides. However, super-rotation could balance the temperature differences between daysides and nightsides, Horinouchi said.

Future research can investigate how atmospheric super-rotation on Venus has remained stable over time, Horinouchi said.

The scientists detailed their findings in the April 24 issue of the journal Science.