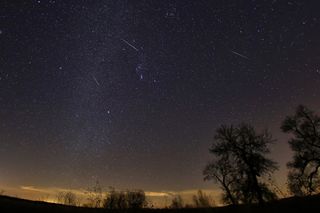 Meteors streak through the sky over Texas in this photo captured by Tony Corso during the Geminid meteor shower in December 2017.
(Image: © Tony Corso)

When meteor enthusiasts think of the month of December, they immediately conjure up visions of the Geminids. Over the years, these have evolved into the most reliable of the dozen or so annual meteor displays.

But this year, a nearly full moon almost wrecked the Geminids by lighting up the sky and squelching all but the brightest meteor streaks.

However, as a "consolation prize," there is another December meteor show that hardly gets any notice at all: the Ursids.

This year, the peak of this meteor display is due during the overnight hours of Sunday (Dec. 22), into the morning hours of Monday (Dec. 23).

The Ursids (sometimes also referred to as the Umids) are so named because they appear to fan out from the vicinity of the bright orange star Kochab in the constellation of Ursa Minor, the little bear. Kochab is the brighter of the two outer stars in the bowl of the Little Dipper (the other being Pherkad) that seem to march in a circle like sentries around Polaris, the North Star.

Kochab's position so near to the north pole of the sky means that the star almost never sets for most viewers in the Northern Hemisphere (the meteor shower is not visible from the Southern Hemisphere). Because the Ursids seem to fan out from this particular region of the sky, you can look for these faint, medium-speed meteors all through the night. They reach their peak during the overnight hours of Dec. 22-23, which is also good news in terms of the moon.

While the moon "muscled in" on the peak of the Geminids near full phase last week, the natural satellite will have shrunk to a thin, waning crescent phase when the Ursids reach their peak. And even after the moon rises at around 4:30 a.m. local time on Monday, it won't create much of a hindrance to meteor watching.

This is a fortunate circumstance, because the Ursids are an often neglected meteor shower. That's because the meteor shower almost always coincide with the winter solstice, which means skywatchers must brave cold temperatures to see the display. And while the Geminids typically produce prolific numbers of bright meteors during the course of a single hour, the usual Ursid rate is considerably less, bringing only about a dozen or so moderately bright meteors per hour at the shower's peak. These meteors, or "shooting stars," are actually the dusty material shed by Comet 8P/Tuttle, which orbits the sun once every 13.6 years and is not due to return until August 2021.

On occasion, planet Earth has interacted with a dense, narrow stream of particles shed by this comet, which has caused brief outbursts of Ursid meteors numbering in the dozens per hour. This happened in 1945 and 1986, and counts reached 30 per hour in 2000 and again during the years 2006 through 2008. But unfortunately, no such interaction is expected this year.

Then again, you might want to periodically check the sky on Sunday night, just in case the "Little Bear's meteor shower" decides to come out of winter hibernation.