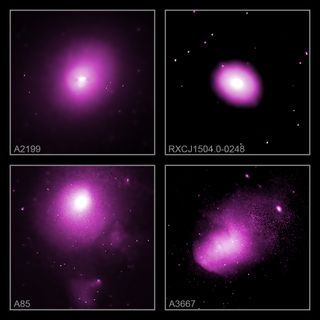 These four galaxy clusters were among hundreds analyzed in a large survey to test whether the universe is the same in all directions over large scales. The study results suggest the concept of an "isotropic" universe may not entirely fit.
(Image: © NASA/CXC/Univ. of Bonn/K. Migkas et al.)

The universe may not be the same in every direction after all.

The expansion rate of the universe appears to vary from place to place, a new study reports. This finding, if confirmed, would force astronomers to reassess just how well they understand the cosmos.

"One of the pillars of cosmology — the study of the history and fate of the entire universe — is that the universe is 'isotropic,' meaning the same in all directions," study lead author Konstantinos Migkas, of the University of Bonn in Germany, said in a statement. "Our work shows there may be cracks in that pillar."

Related: The universe: Big Bang to now in 10 easy steps

The universe has been expanding continuously for more than 13.8 billion years, ever since the Big Bang — and at an accelerating rate, thanks to a mysterious force called dark energy. Equations based on Einstein's general theory of relativity suggest that this expansion is isotropic on large spatial scales, Migkas wrote Tuesday (April 7) in a blog post about the new study.

Observations of the cosmic microwave background (CMB), the universe-pervading radiation left over from the Big Bang, support this notion, he added: "The CMB seems to be isotropic, and cosmologists extrapolate this property of the very early universe to our current epoch, nearly 14 billion years later."

But it's unclear how valid this extrapolation is, he stressed, noting that dark energy has been the dominant factor in the universe's evolution over the last 4 billion years or so. Dark energy's "baffling nature has not yet allowed astrophysicists to understand it properly," Migkas wrote. "Therefore, assuming it to be isotropic is almost a leap of faith for now. This highlights the urgent need to investigate if today's universe is isotropic or not."

The new study reports the results of one such investigation. Migkas and his colleagues studied 842 galaxy clusters, the largest gravitationally bound structures in the universe, using data gathered by three space telescopes: NASA's Chandra X-ray Observatory, Europe's XMM-Newton and the Advanced Satellite for Cosmology and Astrophysics, a joint Japanese-U.S. mission that ended in 2001.

The researchers determined the temperature of each cluster by analyzing the X-ray emissions coming from huge fields of hot gas within them. They used this temperature information to estimate each cluster's inherent X-ray luminosity, without needing to take into account cosmological variables such as the universe's expansion rate.

The researchers then calculated X-ray luminosity for each cluster in a different way, one that did require knowledge of the universe's expansion. Doing so revealed apparent expansion rates across the entire sky — and these rates didn't match up everywhere.

"We managed to pinpoint a region that seems to expand slower than the rest of the universe, and one that seems to expand faster!" Migkas wrote in the blog post. "Interestingly, our results agree with several previous studies that used other methods, with the difference that we identified this 'anisotropy' in the sky with a much higher confidence and using objects covering the whole sky more uniformly."

It's possible that this result has a relatively prosaic explanation. For example, perhaps galaxy clusters in the anomalous areas are being pulled hard gravitationally by other clusters, giving the illusion of a different expansion rate.

Such effects are seen at smaller spatial scales in the universe, the researchers said. But the new study probes clusters up to 5 billion light-years away, and it's unclear if gravitational tugs could overwhelm expansion forces over such vast distances, they added.

If the observed expansion-rate differences are indeed real, they could reveal intriguing new details about how the universe works. For instance, maybe dark energy itself varies from place to place throughout the cosmos.

"It would be remarkable if dark energy were found to have different strengths in different parts of the universe," study co-author Thomas Reiprich, also of the University of Bonn, said in the same statement. "However, much more evidence would be needed to rule out other explanations and make a convincing case."

The new study appears in the April 2020 issue of the journal Astronomy and Astrophysics. You can read it for free at the online preprint site arXiv.org.