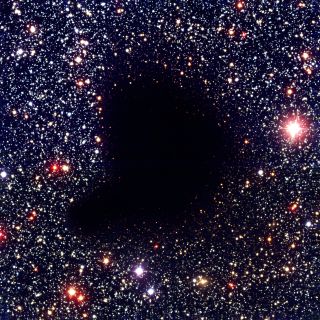 This image from NASA shows a cloud in space (Molecular Cloud Barnard 68, to be precise) that looks a bit like a void, but isn't one. Real voids don't look like much of anything from Earth... because they aren't much of anything.
(Image: © FORS Team, 8.2-meter VLT Antu, ESO)

There are voids in the universe, and we can't see them properly. And that's a good thing.

These voids — giant, irregular gaps in space that are empty of galaxies — are all over the cosmos. But, because they are empty, astronomers can't directly observe them. Instead, they spot them by mapping galaxies across space, and then marking the areas in between these areas. However, from our perspective on Earth, all those voids look distorted.

These areas appear stretched in some places and squished in others. That’s a consequence of "redshifting" of galaxies at their borders, a visual distortion caused by the movement of these systems: As they move away from the viewer (Earthlings, in this case), the galaxies' wavelengths appear to stretch, becoming more red; those moving toward us would look more blue as their wavelengths get shorter. Dark energy is the name astronomers have given to an invisible force stretching our universe and causing galaxies to move away from one another.

That distortion turns out to be a good thing, according to a paper published July 9 in the journal Physical Review D. Until now, researchers have relied on precise measurements of the redshifts of individual galaxies to figure out how fast the universe is expanding, and in turn, how much dark energy is present to drive that expansion. But measuring the distortions of voids turns out to be a much more precise technique, allowing the researchers to narrow down that expansion even further. [From Big Bang to Present: Snapshots of Our Universe Through Time]

"What we are actually measuring is the distortion in the positions of galaxies around void regions," said Seshadri Nadathur, a researcher at the University of Portsmouth in the United Kingdom, and lead author of the paper. "The cool thing about voids is that they are regions of space around which we can very accurately model galaxy motions."

That's because the math needed to precisely determine the motions of galaxies becomes a lot simpler inside these voids, Nadathur told Live Science. (In this case, the research team studied voids about 5.5 billion light-years from Earth.)

"Galaxies move because of gravity pulling them toward regions of excess matter, and the problem generally is that our theory of gravity — Einstein’s general relativity — is very complex, and the equations are hard to solve exactly," he said. "So most of the time in cosmology we use approximations — known as 'perturbation theory' — to help make the problem tractable. This perturbation theory works a lot better in void regions than it does in regions where there is lots of matter, so our predictions are simpler to make and a lot more accurate in voids."

The upshot of that added accuracy is that, using the technique pioneered in this paper, scientists can make much more precise estimates of the expansion rate of the universe, and better confirm that observed expansion rates line up with astronomers' preferred theories for why the expansion is happening . The new result also further limits the scope of some alternative theories that are floating around out there. The previous best measurements of galactic motion did all this too, but about four times less well, according to Nadathur.

Those previous best measurements of the redshifts of galactic voids came from a study of the sky called the Baryon Oscillation Spectroscopic Survey (BOSS). This void-distortion measurement also relied on BOSS data, but vastly improved on its conclusions applying this new analysis technique to the data from BOSS.

The improved measurement of the universe's expansion conformed to existing theories of how dark energy works in the universe, the researchers wrote in the paper: that we live in a "flat" universe with constant dark energy driving its expansion. "By putting our results together with those from the BAO [Baryon Acoustic Oscillation] technique, we are able to get a much better measurement of the cosmic expansion rate 5.5 billion years or so ago," Nadathur said. "And this in turn is very important because it tells us what dark energy has been doing during that time, as well as other things like the curvature of space — which is what gets us cosmologists excited."

The researchers also pointed out in the paper that there are several upcoming efforts to scan the sky more precisely than BOSS, in order to understand dark energy even better. This same technique, the researchers wrote, should vastly improve the precision of those surveys as well.