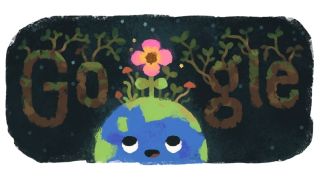 Google is celebrating the vernal equinox with Google Doodles illustrating the start of spring in the Northern Hemisphere and the beginning of autumn in the Southern Hemisphere.
(Image: © Google)

The seasons change on Earth today, and Google is getting into the equinox spirit with a pair of doodles to celebrate the yearly milestone.

Today, March 20, marks the the vernal equinox, when the sun passes over Earth's equator (from our perspective on the planet) and the Northern Hemisphere is tilted toward the sun. That leads to longer days (and the start of spring!) in the north and shorter days (and autumn) in the south.

To celebrate the seasonal change, Google created two doodles: one celebrating the first at of spring for the Northern Hemisphere, and other for the first day of fall in the Southern Hemisphere.

Tonight's full moon occurs at 9:43 p.m. EDT (0143 March 21 GMT) and will be the third and final "supermoon" of 2019, according to NASA. The space agency describes supermoons as a full moon that occurs near perigee, the closest point to Earth in the moon's monthly orbit.

So, celebrate the first day of spring (or fall, if you're in the Southern Hemisphere) with a look at the "Super Worm Equinox Moon" tonight!

Editor's note: If you capture an amazing photo or video of the Super Worm Equinox Moon and would like to share it with Space.com for a story or gallery, send images and comments to spacephotos@space.com.