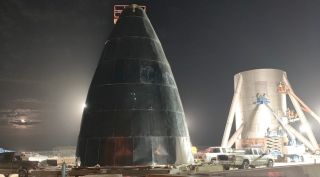 SpaceX hopes a little friendly competition will improve the design of its Mars spaceship.

The company has already built a scaled-down prototype of that 100-passenger "Starship" craft at its South Texas facility. And similar manufacturing and development work is being done on Florida's Space Coast, SpaceX founder and CEO Elon Musk confirmed this week.

"Both sites will make many Starships. This is a competition to see which location is most effective. Answer might be both," he said in another tweet that day. "Any insights gained by one team must be shared with the other, but other team not required to use them," he added in another tweet.

The reusable Starship is designed to take people to and from the moon, Mars and other distant destinations. The vehicle will launch atop a powerful rocket called Super Heavy, which will also be reusable.

Both Starship and Super Heavy will employ SpaceX's next-generation Raptor engine. Seven Raptors will power Starship, and the Super Heavy will incorporate 31 of them. SpaceX has finished building its fourth Raptor, and the fifth is under construction at the company's headquarters in Hawthorne, California, Musk said in Tuesday's tweet thread. SpaceX will likely hit the 100-Raptor mark by early 2020, he added.

The Texas-built Starship prototype, which SpaceX calls Starhopper, uses one Raptor engine. The vehicle completed a brief test hop in Boca Chica last month, rising slightly off the pad while still connected to the ground via a tether.

Starship and Super Heavy already have a flight on their manifest: Japanese entrepreneur Yusaku Maezawa booked a round-the-moon Starship trip, with a target launch date of 2023.

But the real target for the space transportation system is Mars. Musk has said many times over the years that he founded SpaceX primarily to help humanity settle the Red Planet and become a multiplanet species.