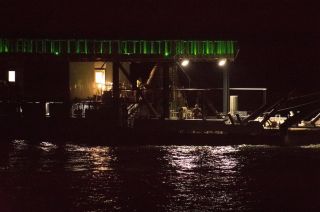 Onlookers gathered at Jetty Park, a popular launch viewing location at the mouth of the port, in anticipation of Dragon’s arrival. SpaceX's GO Searcher recovery ship pulled into port just after 9:30 p.m. EST (0130 GMT on March 10).

Saturday’s arrival wrapped up a successful uncrewed demonstration mission for Crew Dragon that began one week prior. A Falcon 9 rocket lofted the capsule into orbit on March 2 from historic Pad 39A at NASA's Kennedy Space Center. Crew Dragon then spent a day chasing down the International Space Station (ISS), docking autonomously with the orbiting lab early Sunday morning (March 3).

Recovery crews were waiting to pluck the capsule — its previous stark white exterior now resembling a toasted marshmallow — out of the water and haul it back to shore. With the help of marine traffic sites, space enthusiasts were able to track Dragon on its journey home.

About 100 people adorned the shoreline of Jetty Park as the first of SpaceX’s recovery fleet came down the channel. Off in the distance, the Dragon-toting ship GO Searcher was barely visible. Waves crashed against the pier and the constellation Ursa Major shone brightly overhead; excitement grew with each passing minute. Finally, the boat, which had been holding just outside the port, picked up speed and started her approach.

Colored lights adorned the sides of the ship, with a green square showcasing the vessel’s helipad (which can be used to transport astronauts in case of emergency). As the distance between GO Searcher and her awaiting fans closed, Crew Dragon came into view. Peeking out from the stern of the ship, Dragon’s scorched appearance was visible, even in the dimly lit night.

Crew Dragon was quickly moved into a U.S. Navy submarine basin, where the craft would be offloaded and transported to SpaceX’s Cape Canaveral facilities. (Typically, when Falcon 9 first stages arrive in port after landing on a SpaceX drone ship, the boosters are towed to the SpaceX dock further into the port).

While Crew Dragon flew sans crew on this inaugural mission, buckled inside the spacecraft was a faux astronaut — a spacesuit-wearing test dummy named Ripley. If all goes well with SpaceX's next major test — an inflight abort mission scheduled for early summer — we could see astronauts fly aboard Crew Dragon later this year.

In the meantime, the Florida Space Coast is gearing up for its next launch. On Friday (March 15), a United Launch Alliance Delta IV rocket will launch the Air Force's 10th Wideband Global SATCOM (WGS) communications satellite into orbit at 6:56 p.m. EDT.