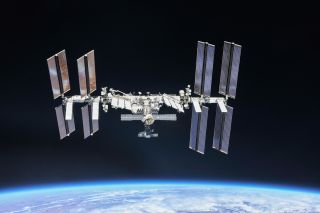 The Expedition 56 crewmembers photographed the International Space Station from a Soyuz spacecraft after undocking in November 2018 to celebrate the space lab's 20th anniversary.
(Image: © Roscosmos/NASA)

This month, Russian and European engineers confirmed the success of their "open-heart surgery" on the computer lifeline of the International Space Station.

Teams from both the Russian space agency Roscosmos and the European Space Agency (ESA) developed a method in which an astronaut or cosmonaut aboard the space lab could upgrade the computers that keep the ISS on track and in the right position, known collectively as the Data Management System. It's a task that ESA representatives described in a statement as "the equivalent of open-heart surgery on Earth!"

Engineers on the ground rigorously planned and tested the process before it would be performed in space to ensure that the repair work could be done on-site without posing any risk to the spacecraft or its inhabitants, according to ESA.

This type of testing largely happens behind the scenes, ESA said, and doesn't usually get a lot of attention unless something bad occurs. But streamlining repair work can have implications for destinations that space agencies like NASA are aiming toward, like the moon, Mars and perhaps beyond.

Anything in low Earth orbit is already quite far away from the resources needed for repairs. ESA explained that fixing a space computer is complicated because of the long turnaround: Time adds up as a computer waits to hitch a ride back to Earth, gets fixed and waits to launch again.

The new procedure reduced repair time from six months to a few days, according to ESA.

The recent development in space-lab computer repair was made possible by engineers' discovery that most of the failures in these computers took place in their circuit boards. The teams then came up with a solution, creating a new printed circuit board that matched the old version's form and function but relied on newer components that were easier to source.

In January 2019, Russian cosmonauts confirmed that the computer from the surgery experiment survived the operation, in which astronauts replaced an older circuit board with a new one. And recently, "all is now confirmed to be working properly," ESA representatives wrote in the statement.

Having spare parts and being able to make repairs in space may help the ISS survive until 2030 and offers valuable information for other orbital projects. One such project NASA is targeting is the Lunar Gateway, which would orbit the moon and serve as a hub for scientists and crewmembers (and maybe even tourists) as they prepare to explore Earth's natural satellite.