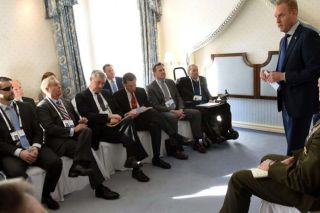 WASHINGTON — Acting Defense Secretary Patrick Shanahan on Wednesday (Feb. 27) sent to Capitol Hill a legislative proposal and a "strategic overview" of how the Pentagon plans to organize a U.S. Space Forrce as a separate military branch. The information was emailed to the staff directors of the House and Senate Armed Services Committees, as well as the House and Senate Appropriations defense subcommittees.

The proposal is the culmination eight months of work since President Trump directed the Pentagon to draw up a plan to create a Space Force. Shanahan already had been designated by Congress as the point man for the space reorganization and he has overseen every step of the process.

Now that the proposal has been kicked over to Congress, DoD faces what could be a harder-than-expected job communicating the plan to Congress and the public. One of the challenges for DoD will be to argue that Congress should authorize a Space Force for reasons of national security, not just to satisfy the commander-in-chief's directive.

The Pentagon also will be pressed to explain why it's moving to stand up a U.S. Space Command at the same time it is pushing for the establishment of a new military service for space.

"It is kind of a confusing thing when you talk about a Space Force and you talk also about the combatant command and part of the two are similar," Senate Armed Services Committee Chairman Sen. James Inhofe (R-Okla.) said on Tuesday during a posture hearing with the commanders of U.S. Strategic Command and U.S. Northern Command.

Ranking SASC Member Jack Reed (D-R.I.) expressed the view held by many that he supports "creating a full unified command for space, however I'm very dubious about the need to create an entire new bureaucracy of a separate service and all that entails."

Two defense officials told SpaceNews that U.S. Space Command is about 60 to 90 days away from being stood up. Although the command does not require congressional authorization, DoD has asked Congress to do a "technical revision" to the Fiscal Year 2019 National Defense Authorization Act that directs the establishment of a "subordinate unified command for space" under U.S. Strategic Command that would be "responsible for joint space warfighting operations."

Trump in December signed a policy directive to establish U.S. Space Command, which would go beyond what the NDAA directed. "So now we do have some cleanup to do," the official said of the legislative language. "We believe we're going to get through that between now and the first part of May."

Hyten did stir some confusion on Tuesday when he told Sen. Marsha Blackburn (R-Tenn.) that STRATCOM would retain space responsibilities.

He said STRATCOM will continue to support space to ensure there are no gaps. "I was around when we transitioned the old U.S. Space Command to U.S. Strategic Command in 2002, now we're kind of going back the other way. And I watched us almost break the space mission when we did that because we haphazardly slapped billets and said these 500-and-plus billets are going to move from Colorado to Omaha."

A defense official said Hyten was not trying to suggest that STRATCOM intends to permanently retain space missions after the new command is in place. And neither did Hyten mean to "get ahead of the basing process" by speculating where Space Command's headquarters might ultimately be located, the official said. According to a draft memo, Space Command initially would be formed with about 600 people spread across four locations: Offutt Air Force Base in Omaha, Peterson Air Force Base and Shriever Air Force Base in Colorado, and Vandenberg Air Force Base, California. Organizations that would transition to Space Command include the Combined Space Operations Center at Vandenberg, the Missile Warning Center in Colorado Springs, and the Joint Navigation Warfare Center in Albuquerque, New Mexico.

The defense official said STRATCOM will work with Space Command to "move these disparate geographic components to the new headquarters when it makes sense." That transition could take at least three years.