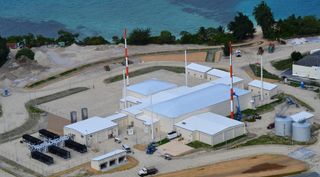 This is an aerial photo of the U.S. Air Force Space Surveillance Network on Kwajalein Atoll slated for initial operations in late 2019.
(Image: © Lockheed Martin)

"We happened to be up during an endurance test and we were very excited to see that the system performed nominally," Matthew Hughes, Lockheed Martin Space Fence and Space Surveillance programs business development manager, told SpaceNews. "Space fence is all about the ability to identify break ups, maneuvers, closely spaced objects, proximity operations, new foreign launches."

Lockheed Martin completed construction of Space Fence and is conducting testing and evaluation of its capabilities. The Air Force is scheduled to begin initial operation of the ground-based radar, which sends out a curtain of radio frequency energy wider than the continental United States, in the fourth quarter of this year.

The Space Fence is designed to detect unusual activity in orbit, like multiple objects in orbit that do not correlate to objects in the Space Surveillance Network catalog. When new objects are detected, it issues alerts and begins tracking them to determine their orbits, he added.