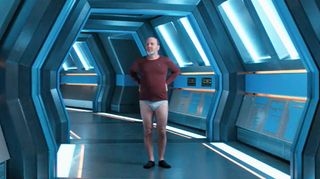 Hot on the heels of "Q&A," the first in a total of six new "Short Treks" released only days ago, comes the second episode, entitled "The Trouble With Edward." This new episode stars  Archer himself, the incredibly talented comedy actor H. Jon Benjamin, alongside Rosa Salazar, who recently played Alita in "Alita: Battle Angel."

The tone is quickly set in this "Short Trek," as the episode's opening credits feature a joke about the rapid reproduction rate of tribbles. The title itself is a play on  "The Trouble With Tribbles," an episode from "Star Trek: The Original Series" (S02, E13) that introduced us to these cute, furry creatures.

Following the tribble-riddled credits, "The Trouble With Edward" opens on the Enterprise dropping out of warp and slowly gliding by. However, unlike "Q&A," this episode doesn't take place on that particular vessel.

We soon hear the familiar sound of Capt. Christopher Pike's (Anson Mount) voice: "Captain's log, stardate 1421.9. It's not often that losing a crewmember is cause for celebration, but our young science officer Lynne Lucero has been promoted. She's taking command of the research vessel USS Cabot, above Pragine 63. They're lucky to have her."

Pike gives Lucero (Salazar) a brief pep talk on the way to the transporter room — and we get a look at the stunning, reimagined deck on the NCC-1701 — before the ship goes off to complete a new assignment.

The episode then cuts to the first meeting of all of the science division heads in the captain's briefing room. From this moment onward, Benjamin really steals the show. For starters, his voice is instantly recognizable; it's unique and tailor-made for comedy. If the art of deadpan could be filtered, refined to its purest form, enhanced and bottled, the final product would be the voice of H. Jon Benjamin.

He plays Lt. Edward Larkin, the Edward from the episode's title, a scientist aboard the USS Cabot who specializes in protein. The meeting of scientists focuses on planet Pragine 63, a world near the edge of Klingon space that is home to a starving civilization. Young Lucero has been tasked with finding a solution to this global starvation. Larkin's contribution to the meeting is to breed Tribleustes ventricosus (tribbles), a life-form that is indigenous to the planet Iota Geminorum IV, as a food source. (In this episode, tribbles have been given a different scientific name than the one listed on Memory Alpha, which is Polygeminus grex, probably to provide a smoother transition to the origin of the word "tribbles.")

During the meeting, which is equally awkward and side-splittingly entertaining, Larkin explains that some genetic modification could make the tribbles easier to farm, as they are "slow to reproduce" and "not very intelligent." It's obvious then that some genetic modification did take place, as the tribbles' voracious appetite and rapid reproduction rate is what revealed the Klingon's plot to poison a grain supply in "The Trouble With Tribbles" episode. That outing is set approximately 12 years after the events of this "Short Trek."

Larkin's proposal doesn't go over well with the other officers or the new captain, and the lieutenant begins to feel ostracized. His frustration gets the better of him, and following an awkward meeting with Lucero, she informs Larkin that he will be transferred off of the USS Cabot.

Meanwhile, the tribble he had been experimenting on has suddenly started shooting out babies, and it breaks out of its containment in the science lab, setting off ship-wide alarms.

Accompanied by the dulcet tones of Bing Crosby singing "Johnny Appleseed," the crewmembers wander frantically about the ship, picking up literally thousands of tribbles. Before long, the little alien critters find their way into the ship's circuitry, disabling transporters and a number of other critical systems, including life support.

Chaos continues to ensue, and it's nothing short of hilarious.

"He was an idiot"

As the crew is forced to abandon ship due to the havoc wreaked by the multiplying tribbles, Larkin becomes overwhelmed by the creatures while delivering a maniacal monologue. He is unable to make it to the escape pod, despite Lucero's efforts to save him.

We soon learn that, even after the loss of the science vessel Cabot, some tribbles managed to make it down to the surface of Pragine 63, forcing the evacuation of an entire civilization.

"According to your report, this entire calamity was caused by one crewmember," the lead Starfleet admiral of the inquiry board says, staring down at Lucero. "How do you explain that?"

Lucero sighs, "He was an idiot."

"The Trouble with Edward" marks the first time comedy has been so obvious in "Star Trek," and the result is one of the best "Short Treks" since we saw the enigmatic, charismatic, mesmerizing and memorable Harcourt Fenton Mudd, deliciously played by Rainn Wilson, in "The Escape Artist."

Credit for this episode's hilarity goes to writer Graham Wagner ("The Office," "Portlandia") and director Daniel Gray Longino ("Portlandia," "Who Is America?"). Additional accolades go to showrunner and executive producer Alex Kurtzman for allowing "Trek" to experiment with something like this. More, please.

"Short Treks" air in the U.S. on CBS All Access. In Canada they're available on the TV channel Space, the streaming service CraveTV as well as the Snackable TV app. Sadly, however, fans in the UK will miss out as there are so far no plans for Netflix to host these episodes.Four "Short Treks" remain: "Ask Not," (which will air on Thursday, Nov. 14), "The Girl Who Made the Stars" (Thursday, Dec. 12), "Ephraim and Dot," (Thursday, Dec. 12) and finally "Children of Mars," (Thursday, Jan. 9).

Additionally, the 10-episode first season of "Star Trek: Picard" will soon premiere on Jan. 23, 2020 on CBS All Access in the U.S., and on both Space and Crave in Canada. CBS and Amazon Studios have announced that the series will stream on Amazon Prime Video in over 200 countries worldwide within 24 hours of its premiere on CBS All Access and Space.