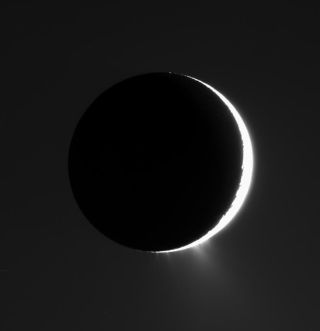 Scientists have detected new types of organic compounds in the plumes that have been erupting from Saturn's icy moon Enceladus.

NASA's Cassini spacecraft collected invaluable data and images of Saturn and its moons over the approximately 20 years that the mission took place. While the mission ended on Sept. 15, 2017, with the craft diving toward the planet in a "Grand Finale," scientists continue to study the wealth of data that they gathered during the mission.

In one new study, scientists looked at the material that Enceladus ejects from its core using hydrothermal vents. The material mixes with water in the moon's subsurface ocean and is then emitted as water vapor and icy grains.

In studying these ejections, the team found organic molecules that are condensed onto these grains and which contain oxygen and nitrogen. This comes after the first discovery of organics on the moon in 2018.

Similar compounds on Earth take part in the chemical reactions that form amino acids, which are the organic compounds that combine to form proteins and are essential to life as we know it.

On Earth, energy, or heat, from hydrothermal vents on the ocean floor helps to fuel these amino acid-producing reactions. With these findings, scientists have suggested that perhaps something similar is happening on Enceladus and the hydrothermal vents under its subsurface ocean are aiding in the creation of amino acids on the moon.

"If the conditions are right, these molecules coming from the deep ocean of Enceladus could be on the same reaction pathway as we see here on Earth. We don't yet know if amino acids are needed for life beyond Earth, but finding the molecules that form amino acids is an important piece of the puzzle," Nozair Khawaja, who led the research team from the Free University of Berlin, said in a statement.

Now, the discovery of these organic compounds in no way equates to the discovery of life or even necessarily the building blocks of life. But it is another step in the direction of discovering whether or not amino acids might form on Enceladus and what that might mean with regard to the search for life in the universe.

"Here we are finding smaller and soluble organic building blocks — potential precursors for amino acids and other ingredients required for life on Earth," co-author Jon Hillier said in the statement.

"This work shows that Enceladus' ocean has reactive building blocks in abundance, and it's another green light in the investigation of the habitability of Enceladus," co-author Frank Postberg added in the same statement.

To detect these compounds and come to this exciting conclusion, Khawaja's team used data from Cassini's Cosmic Dust Analyzer (CDA), which detected ice grains emitted in the moon's plumes; and data from the CDA's spectrometer, which analyzed the composition of the grains.

These findings were published Oct. 2 in the journal the Monthly Notices of the Royal Astronomical Society.