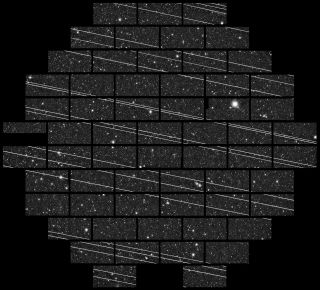 The more astronomers consider the advent of satellite megaconstellations, the more anxious they get.

Now, the International Astronomical Union (IAU), a premier group of astronomers, has spoken out again, voicing scientists' concerns about how the satellites that make up OneWeb and SpaceX's Starlink will interfere with observations of the night sky. The statement accompanies the publication of a new page designed for the public about satellite constellations and optical astronomy.

"The IAU considers the consequences of satellite constellations worrisome," the organization said in the new statement. "They will have a negative impact on the progress of ground-based astronomy, radio, optical and infrared, and will require diverting human and financial resources from basic research to studying and implementing mitigating measures."

Related: SpaceX just launched a fleet of Starlink satellites. Here's how to spot them in the sky.

SpaceX's Starlink constellation has inspired particular consternation; at each launch of 60 satellites, astronomers have rediscovered how severely Starlink interferes with optical observations. The satellites naturally reflect a lot of light, resulting in bright lines running across the images produced by observatories. The outcry was particularly strong after the first Starlink launch, and the IAU released an initial statement about satellite constellations soon after, in June 2019.

In the new statement, the organization highlighted the urgency these concerns have gathered over the past year. "The IAU notes that currently there are no internationally agreed rules or guidelines on the brightness of orbiting manmade objects," the statement read. "While until now this was not considered a priority topic, it is now becoming increasingly relevant."

The IAU also asked two subgroups to evaluate the ways this sort of massive network of satellites could affect astronomers and to reach out to the companies launching such satellites. The new statement focuses on the first of those tasks, and the results offer a more detailed look at what astronomers can expect from these megaconstellations. The astronomers found that many of the satellites would pass low over the horizon, and those passing higher overhead would likely be too faint to observe by eye.

The findings also note that because the satellites are most obtrusive right after they launch, the impact on astronomy will depend based on how frequently new satellites are launched: The same number of satellites grouped into fewer launches will interfere less with astronomers' observations.

The IAU statement also highlighted particular concerns that the constellations would interfere with observing programs that watch large swaths of the sky at a time. That's because the satellites could easily overexcite the detectors on the large telescopes that conduct this sort of observing. Certain telescopes could lose up to 30% of their twilight observations, the IAU found.

And the organization isn't going to let the night skies brighten without a fight. The new statement ended with a condemnation of interfering with astronomical observations: "The IAU stresses that technological progress is only made possible by parallel advances in scientific knowledge. Satellites would neither operate nor properly communicate without essential contributions from astronomy and physics. It is in everybody’s interest to preserve and support the progress of fundamental science such as astronomy, celestial mechanics, orbital dynamics and relativity."