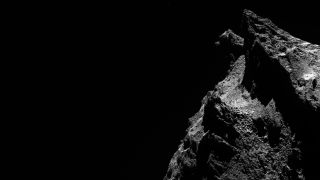 Do you see the cat in this comet?
(Image: © ESA/Rosetta/MPS for OSIRIS Team MPS/UPD/LAM/IAA/SSO/INTA/UPM/DASP/IDA)

Can you spot a cat in this cosmic image? This photo — just one of 70,000 available in a new Rosetta spacecraft image archive — has a cometary view that looks like a cat's face from side-on.

The two "ears" visible near the top of the image are actually twin peaks on each side of the C. Alexander Gate, a feature named after Claudia Alexander, a Rosetta project scientist who died in July 2015. Rosetta was less than 12.5 miles (20 kilometers) from the comet's surface when it got this image, back in 2014.

Rosetta orbited Comet 67P/Churyumov-Gerasimenko for more than two years, between 2014 and 2016. The probe's high-resolution imagery showed comet activity in better detail than scientists had ever seen before, as 67P swept closer to the sun. Parts of the comet's surface burst open in jets of ice and dust as the sun warmed 67P.

The European Space Agency, which ran the mission, has now made the full image archive from Rosetta's Optical, Spectroscopic and Infrared Remote Imaging System (OSIRIS) available online. In addition to the resources devoted to 67P specifically, the website now provides more information about comets in general. These small, icy worlds are representative of what the solar system used to look like billions of years ago.

The archive is a joint project with Flensburg University of Applied Sciences and the Max Planck Institute for Solar System Research, which lead the OSIRIS team. Rosetta and its lander, Philae, made numerous discoveries while at the comet. Those included finding out that the type of water that makes up 67P has different isotope (element type) ratios than the water on Earth. This suggests that comets similar to 67P were not responsible for bringing oceans to our own planet.