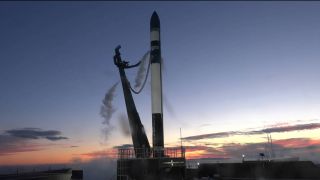 A Rocket Lab Electron booster on the launch pad in New Zealand ahead of the planned June 27 launch of the "Make It Rain" mission.
(Image: © Rocket Lab)

A Rocket Lab Electron booster is scheduled to lift off from the company's New Zealand launch site Saturday, during a two-hour window that opens at 12:30 a.m. EDT (0430 GMT; 4:30 p.m. local New Zealand time).

You can follow the liftoff live here at Space.com, courtesy of Rocket Lab, or directly via the company. Coverage will start 20 minutes before launch.

Saturday morning's launch, which was procured via Seattle-based company Spaceflight, will be the third Electron liftoff of the year and the seventh overall.

Rocket Lab gives all of its missions a light-hearted name, and this one is called "Make It Rain" — a reference to Spaceflight's famously damp home city. (New Zealand is pretty wet as well.)

Among the satellites going up Saturday are two Prometheus craft, which will be operated by the United States Special Operations Command, and the ACRUX-1 cubesat from the Melbourne Space Program, an educational organization that aims to give Australian students hands-on experience with space projects.