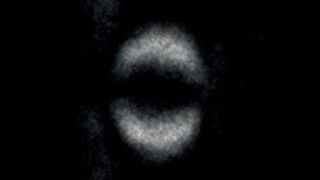 Scientists just captured the first-ever photo of the phenomenon dubbed "spooky action at a distance" by Albert Einstein. That phenomenon, called quantum entanglement, describes a situation where particles can remain connected such that the physical properties of one will affect the other, no matter the distance (even miles) between them.

Einstein hated the idea, since it violated classical descriptions of the world. So he proposed one way that entanglement could coexist with classical physics — if there existed an unknown, "hidden" variable that acted as a messenger between the pair of entangled particles, keeping their fates entwined. [18 Times Quantum Particles Blew Our Minds in 2018]

There was just one problem: There was no way to test whether Einstein's view — or the stranger alternative, in which particles "communicate" faster than the speed of light and particles have no objective state until they are observed — was true. Finally, in the 1960s, physicist Sir John Bell came up with a test that disproves the existence of these hidden variables — which would mean that the quantum world is extremely weird.

Recently, a group at the University of Glasgow used a sophisticated system of lasers and crystals to capture the first-ever photo of quantum entanglement violating one of what's now known as "Bell's inequalities."

This is "the pivotal test of quantum entanglement," said senior author Miles Padgett, who holds the Kelvin Chair of Natural Philosophy and is a professor of physics and astronomy at the University of Glasgow in Scotland. Though people have been using quantum entanglement and Bell's inequalities in applications such as quantum computing and cryptography, "this is the first time anyone has used a camera to confirm [it]."

To take the photo, Padgett and his team first had to entangle photons, or light particles, using a tried-and-true method. They hit a crystal with an ultraviolet (UV) laser, and some of those photons from the laser broke apart into two photons. "Due to conservation of both energy and momentum, each resulting pair [of] photons are entangled," Padgett said.

They found that the entangled pairs were correlated, or in sync, far more frequently than you would expect if a hidden variable were involved. In other words, this pair violated Bell's inequalities. The researchers snapped a picture using a special camera that could detect individual photons, but only took a photo when a photon arrived with its entangled partner, according to a statement.

This experiment "shows that quantum effects do change the types of images that can be recorded," he told Live Science. Now, Padgett and his team are working to improve the imaging performance of the microscope.

The results were published on July 12 in the journal Science Advances.