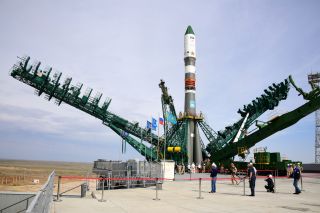 Russia will launch a cargo resupply spacecraft to the International Space Station today (April 24), and you can watch the launch and docking live online.

The uncrewed Progress 75 cargo resupply ship will lift off on a Soyuz rocket from the Baikonur Cosmodrome in Kazakhstan tonight at 9:51 p.m. EDT (0151 GMT on April 25). It is scheduled to arrive at the orbiting laboratory on Saturday (April 25) at 1:12 a.m. EDT (0512 GMT), about three hours after liftoff.

NASA TV will provide live coverage of the launch beginning at 9:30 p.m. EDT (0130 GMT); live coverage of the spacecraft's arrival at the International Space Station will begin on Saturday at 12:30 a.m. EDT (0430 GMT). You can watch it live on Space.com, courtesy of NASA TV, or directly through the agency's livestream.

Loaded inside the cargo vessel are nearly three tons of food, fuel and supplies for the three-person crew of Expedition 63, which includes NASA astronaut Chris Cassidy and cosmonauts Anatoly Ivanishin and Ivan Vagner of the Russian space agency Roscosmos.

The spacecraft will spend about seven months docked with the orbiting laboratory. It is scheduled to depart in December, when it will burn up in Earth's atmosphere.

There are currently two additional cargo resupply ships docked with the station. A Northrop Grumman Cygnus spacecraft, called NG-13, arrived at the station in February and is scheduled to depart in mid-May. Russia's Progress 74 spacecraft, which launched in December, will remain docked at the station until July.