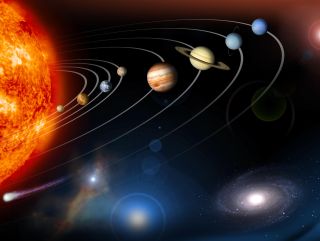 Planetary scientists and astrobiologists are gearing up for a major survey process that will dictate NASA's priorities throughout the 2020s.

That process, overseen by the National Academies of Sciences, occurs every 10 years. National Academies and NASA officials discussed the process Monday (March 16) during a digital replacement for a town hall that was planned to occur at the 51st Lunar and Planetary Science Conference this week in The Woodlands, Texas. (The conference was canceled in response to the spread of COVID-19, the disease caused by the new coronavirus.)

The decadal survey process gathers consensus from a broad swath of scientists in the relevant fields in order to guide NASA's long-term priority setting. The new Planetary Science and Astrobiology Decadal will cover the years 2023 to 2032. This cycle of the decadal survey is just beginning; the most recent step was to agree on the so-called "statement of task," which guides the committee that surveys scientists and writes the final document.

Decadal surveys are crucial guidance documents because they pull together a host of experts' views on the current state of a field and the science questions that the community sees as most pressing. The committees involved in the process turn those evaluations into guidance for NASA as to what types of projects to support.

For the first time, that statement of task directs the committee to consider planetary defense within its purview, as well as planetary science and astrobiology. NASA is already planning to launch its first planetary-defense spacecraft mission, called the Double Asteroid Redirection Test (DART), in July 2021. This spacecraft will collide with the smaller half of a double asteroid called Didymos in September 2022 in order to help scientists calibrate the effect of such a measure on an asteroid's path. A second planetary-defense project, for a space infrared telescope called the Near-Earth Object Surveillance Mission, is in planning for a launch as early as 2025.

A second key addition to the decadal survey statement of task is to consider ways that the three disciplines can benefit from NASA's human-exploration program, most notably the Artemis program that aims to land astronauts on the moon in 2024. "There are a lot of capabilities that human exploration can bring and enable to planetary exploration," NASA Planetary Science Division Director Lori Glaze said during the panel.

There are other small changes to the decadal survey process this cycle, Glaze said. Those updates are meant to help NASA act on the survey's results throughout the decade; they include requests to tie activity recommendations to specific science goals, to provide guidance for how NASA should respond to budget changes and technology developments during the decade, to highlight opportunities to collaborate with other sections of NASA and other organizations, and to evaluate the overall professional health of the planetary-science community.

The committee will also evaluate how NASA and the National Science Foundation should shape their project portfolio. That includes prioritizing among projects targeting different solar system objects and balancing projects of different sizes. That directive also instructs the committee to speak to a helpful balance between space-based projects, typically overseen by NASA, and ground-based projects, which are more typically led by the National Science Foundation.

Beginning perhaps next month and concluding over the summer, scientists focused on planetary science, planetary defense and astrobiology will be able to submit white papers to inform the decadal survey, said David Smith, of the National Academies Space Studies Board, which oversees the decadal. The final timeline depends on when NASA sends over funding for the survey, which is when the National Academies will be able to select one or more chairs for the steering committee and schedule meetings of individual panels that are part of the decadal process.

But the full results of the consultation will take much longer: The draft report is scheduled for completion in October 2021 and the final report for publication in March 2022 at that year's Lunar and Planetary Science Conference.