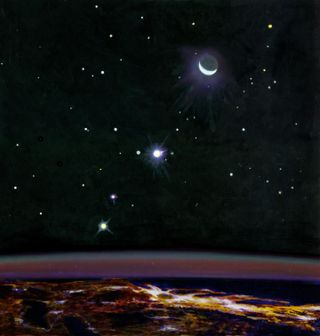 An artist's depiction of the night sky on Oct. 7, 2015, inspired by a photograph taken by NASA astronaut Scott Kelly aboard the International Space Station. On this night, Jupiter, Mars and Venus lined up in the night sky with the crescent moon.
(Image: © Painting by Paul Olsen; acrylic on clayboard, digitally modified)

Over short time scales, the solar system is a beautifully predictable dance, with each planet behaving in a ways that astronomers can calculate — but over long enough periods, it's not such an orderly place.

New research suggests that climate signatures written into the rocks could change that, letting scientists decipher records of the movement of the planets much further back in time than  existing techniques permit. Now, those methods are reliable only back to about 60,000 years ago, the authors write, a flash in Earth's 4.5-billion-year history.

"This means you cannot unpack its history from calculations or models, no matter how precise, because the motions of the real solar system are incredibly sensitive," lead author Paul Olsen, a geologist at Columbia University, said in a statement. "Varying any factor even a tiniest bit results in a different outcome after millions of years — even what the major asteroids, or minor planets, such as Ceres and Vesta, are doing."

So rather than look to the planets to iron out their complicated paths, Olsen and his colleagues — primarily geologists — looked to rocks. Specifically, they tracked down sediment cores from two regions: the Newark Basin in the mid-Atlantic states and the Colorado Basin in Arizona and New Mexico. They argue that the results they found can stretch the timeline for tracking planetary movements back, clarifying a period between 220 and 200 million years ago.

If the results hold up, it would be a dramatic stretch back in time from current calculations, despite the long gap between the new study period and previously analyzed timelines. "One of my co-authors, Jacques Laskar [an astronomer at the Sorbonne University in France], has shown that computations can project forward or backward only 60 million years. After that, the predictions become utterly unreliable," Olsen said. "Over billions of years, the best calculations reveal many possible terrific events, such as one of the inner planets falling into the sun or being ejected from the solar system. Maybe even that Earth and Venus could collide one day."

The principle behind the research is that gravitational interactions between Earth and its neighbors can tweak characteristics of Earth's orbit, which can in turn cause small changes in Earth's climate. (This mechanism, called Milankovitch cycles, is just one phenomenon that can affect Earth's climate; it does not account for the climate change unfolding now, which is caused by greenhouse gases humans have injected into Earth's atmosphere.)

So in the new research, the team looked at a few different measurements that they believe highlight cyclical influences of Mercury, Venus, Mars and Jupiter on Earth's climate. It's incremental and could still be contradicted by other findings, but Olsen said in the statement he was heartened by the support the research provided for the idea that rock records could hide astronomical secrets.

The research is described in a paper published today (March 4) in the journal Proceedings of the National Academy of Sciences.