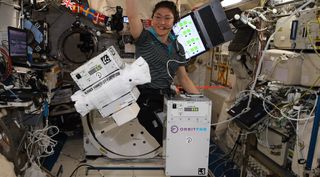 WASHINGTON — A startup company that plans to develop tankers for refueling satellites has completed a key test of its technology on the International Space Station.

Orbit Fab announced June 18 it completed tests of an experiment called Furphy on the ISS, demonstrating the ability to transfer water between two satellite testbeds. At the end of the tests, the water was transferred into the station's own water supply, the first time a private payload supplied the station with water in that manner.

"The Furphy mission has allowed us to test the viability of refueling satellites in orbit," Jeremy Schiel, cofounder and chief marketing officer of Orbit Fab, said in a statement. The tests, he said, were intended to measure the effectiveness of the company's propellant transfer technology in microgravity and its ability to handle issues like sloshing.

Orbit Fab announced plans last fall to fly the Furphy experiment to the ISS with the support of the ISS National Laboratory, the organization that operates the portion of the station's capabilities designed as a national lab.

"With their recent successful completion of in-orbit water transfer operations aboard the space station, Orbit Fab became the first private company to supply the ISS with water using its own proprietary refueling equipment and processes," Ken Shields, chief operating officer of the ISS National Laboratory, said in a statement. He said that aspect of the test demonstrated "NASA's flexibility and desire to accommodate private sector clients who are utilizing the ISS U.S. National Laboratory as a steppingstone to an industrialized low Earth orbit."

The tests on the ISS used water, but the company says the same technology could support a wide range of other propellants. That includes hydrazine, a common propellant for spacecraft thrusters, as well as "green" alternatives and even xenon, used in electric propulsion systems.

Part of the company's technology is a new interface for spacecraft refueling called the Rapidly Attachable Fuel Transfer Interface, or RAFTI. Orbit Fab has been working with satellite manufacturers on the development of RAFTI, which is intended to replace existing fill-and-drain valves on satellite fueling systems, allowing them to be fueled on the ground before launch as well as refueled in space. The first RAFTI system will be delivered to an unidentified customer later this month.

The company plans to use the technologies tested on the ISS for future in-space tankers to enable refueling of satellites. The company has acknowledged that it is getting ahead of the market, since no satellite refueling systems yet exist and most satellites are not designed to be refuelable in orbit.

Orbit Fab argues it is demonstrating that technology to assure the industry that the infrastructure needed for satellite refueling will be ready. "We need to start now to be building confidence that we will be there and ready when those businesses are able to take advantage of it," Daniel Faber, chief executive or Orbit Fab, said in an interview last year. "That's why we're starting now."