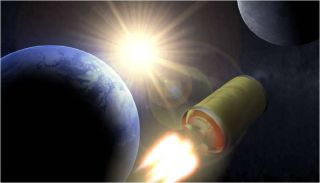 United Launch Alliance (ULA) has devised a plan that could enable a robust space economy based on the refueling of spacecraft away from Earth.
(Image: © ULA)

GOLDEN, Colorado — A major American launch provider has outlined a plan that the company says will help enable a space economy based on refueling spacecraft in Earth orbit.

Dubbed the "Cislunar 1,000 Vision," the initiative foresees a self-sustaining economy that supports 1,000 people living and working in Earth-moon space roughly 30 years from now. The concept stems from an analysis and ongoing technical work by United Launch Alliance (ULA), a joint venture between Lockheed Martin and Boeing Co. that provides launches aboard Atlas and Delta rockets.

A central element of the plan involves the use of a souped-up Centaur rocket stage called ACES (Advanced Cryogenic Evolved Stage). This liquid oxygen/liquid hydrogen upper stage is designed to be reusable and can be refueled, perhaps by propellant made using water extracted from Earth's moonor asteroids. [Moon Base Visions: How to Build a Lunar Colony (Photos)]

A road map to attain the Cislunar 1,000 Vision was detailed at the seventh joint meeting of the Space Resources Roundtable and the Planetary & Terrestrial Mining Sciences Symposium, which was held here from June 7 through June 9.

Sowers told Space.com that the road map also includes a tanker called XEUS. XEUS will use a "kit" that augments an ACES stage, allowing the vehicle to land horizontally on the lunar surface and be stocked with moon-mined fuel for transport to a gravitationally stable "libration point" in the Earth-moon system known as L1.

The XEUS work is being done in collaboration with California-based Masten Space Systems, Sowers said.

"The basic technology has been in development for a number of years," he said. Work is underway to test the Integrated Vehicle Fluids concept at NASA’s Marshall Space Flight Center in Huntsville, Alabama, along with demonstrations of various ACES features, Sowers added.

ULA will solicit proposals for ACES' upper-stage engines, tapping the technologies of aerospace companies such as Aerojet Rocketdyne, XCOR Aerospace and Blue Origin. And the U.S. Air Force is supporting some ACES work under rocket propulsion system contracts, Sowers said.

"There's a lot of activity ongoing," he said, "and we're designing a Vulcan booster to accommodate the ACES upper stage."

"Once we have ACES flying, sometime in the early to mid-2020s, we would be in a position to utilize space-provided propellant," Sowers said.

Lowering the cost of spaceflight

Rocket fuel sourced off Earth could be a game changer for spaceflight, because it's very expensive to launch anything from Earth, Sowers said.

"I want to buy propellant in space," he said. "Once I have a reusable stage and can buy my fuel, then I have the potential to dramatically lower costs to go elsewhere."

For example, a rocket could carry just enough fuel to get to low Earth orbit and then refuel its upper stage in space to get a payload to the much more distant geosynchronous transfer orbit.

"I can potentially do that whole mission cheaper if I can get propellant cheap enough in low Earth orbit," Sowers said.

"Having a source of propellant in space benefits anybody going anywhere in space, to be honest," Sowers said. "What excites me is that, once you have the propellant capability going, you make a lot of other business plans look a lot better, be they on the moon, at L1, or other places."

From prospecting to utilization

Angel Abbud-Madrid, director of the Center for Space Resources at the Colorado School of Mines, is bullish on ULA's plan.

For several decades, three important elements have been considered essential to the development of space resources: finding a recoverable resource, developing the technology to recover it, and a customer, Abbud-Madrid told Space.com.

This third component has been the most challenging task for in-situ resource utilization (ISRU) advocates, Abbud-Madrid said.

"Up to now, governments have been the only customer in the business plan," he said. "The announcement made by ULA radically addresses this weak link by opening up new opportunities for space resources development."

For the first time, a major launch-service provider has seriously stepped forward as a true commercial client to purchase space resources, Abbud-Madrid said.

This plan has reinvigorated the ISRU community by challenging it to re-evaluate all steps of the ISRU process — from prospecting to utilization — to meet these targets, he added.

"I think this is a turning point for ISRU," said Dale Boucher, CEO of Deltion Innovations Ltd. in Ontario, Canada. Deltion develops mining technologies and robotics for the resource sector and is a leader in investigating the promise of space mining.

"It is the first private industry customer declaring an interest in purchasing space-derived materials for commercial use," Boucher told Space.com. "They have provided quantities and price points. They are prepared to set quality metrics. This opens the door to negotiations for 'futures' types of speculative contracts for purchase of commodities, much like new gold mines do, or oil and gas."

The numbers that ULA provided, once crunched, are within the realm of typical terrestrial mining activities and can be used to generate realistic budgets and mine plans, Boucher said.

ULA's estimate that it will need the off-Earth propellant in the early 2020s follows a pattern seen in Earth-based mining, Boucher added.

"Typically, a mine will go from an idea to production in five to 10 years, spend billions to get it up and running, and expect a 10-year life," he said. "It all starts with a solid financing plan coupled to prospective customers."

For the most part, the only potential customers for space-based fuel have been space agencies. But their timelines keep shifting, their budgets keep getting reappropriated and the political will to enable this kind of activity "gets bogged down in bureaucratic zombie zones," Boucher said.

As for the ISRU impact, Boucher said, the ULA plan enables commercialization in deeper space and provides risk reductions for space-agency-sponsored missions.

The "next steps would be to evaluate the knowledge and technical gaps that must be addressed to close the case," he said. "This is not a science task; it is a commercial task."

During this process, Boucher said, it is conceivable that mission plans could be generated, feasibility studies performed, regulatory regimes examined and financing established.

Leonard David is the author of "Mars: Our Future on the Red Planet," to be published by National Geographic this October. The book is a companion to the National Geographic Channel six-part series coming in November. A longtime writer for Space.com, David has been reporting on the space industry for more than five decades. Follow us @Spacedotcom, Facebook or Google+. Originally published on Space.com.