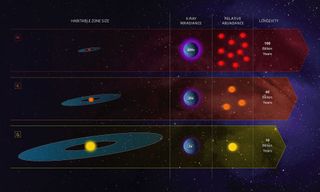 Move over, red dwarfs. Emerging research shows that another star type could be more friendly to life.

Building on nearly 30 years of exoplanet discoveries and studies, some researchers now suggest that orange dwarfs, not the more commonly discussed red dwarfs, could be the best stars to host life. These stars are more stable than their redder counterparts; they burn for billions of years and are less likely to send out damaging X-ray and ultraviolet radiation.

There are other arguments in favor of looking for life around orange dwarfs, too, the scientists behind a new study said during a presentation on Jan. 7 at the 235th meeting of the American Astronomical Society in Honolulu. For example, even though we're used to living with a larger sun, orange dwarfs are three times more abundant than stars of our type, the researchers said. More abundant stars means more chances at life.

Luckily for scientists, orange dwarfs (also known as K stars) represent relatively easy targets for finding planets. The light of such stars is slightly dimmer than our own star, making planets more easily visible as they cross the star's face. And the mass of an orange dwarf is a little smaller than that of a star like our sun, making for a bigger gravitational wobble in the star as it gets tugged on by an orbiting planet.

Orange dwarfs are also remarkably long-lived compared with our sun, allowing more time for complex life to potentially arise on their planets. Our sun is roughly halfway through its 10-billion-year estimated life span, and the star is expected to grow so large that it will make Earth uninhabitable in only 1 billion or 2 billion years. By contrast, orange dwarfs remain more stable and can last for between 15 billion and 45 billion years.

"The K stars, especially the warmer ones, have the best of all worlds," Edward Guinan, an astronomer at Villanova University in Pennsylvania, said in a NASA statement. "If you are looking for planets with habitability, the abundance of K stars pump up your chances of finding life."

Guinan and fellow Villanova astronomer Scott Engle are co-leading a program called "GoldiloKs," which is generating data about K-type stars as well as stars like our sun, which are called G stars. Working with undergraduate students, the scientists seek to learn more about K and G stars: how old they are, how fast they rotate, and how much X-ray and ultraviolet radiation they emit.

The researchers are also scrutinizing planets that are potentially habitable and that orbit nearby orange dwarfs, like Kepler-442, Tau Ceti and Epsilon Eridani. Scientists usually define "habitability" as referring to rocky worlds orbiting at a distance from a star that permits water to exist on the planetary surface. If the planet is too close to the star, the water may evaporate, and if the world is too far, that water may freeze into ice. (Planetary habitability can also be defined in metrics such as exposure to radiation, which GoldiloKs is trying to take into account, too.)

GoldiloKs researchers are pulling data from several telescopes to inform the research, including NASA's Hubble Space Telescope, NASA's Chandra X-ray Observatory and the European Space Agency's XMM-Newton satellite. Powerful future observatories, such as NASA's James Webb Space Telescope, which is expected to launch in 2021, could also study these worlds, the researchers said.