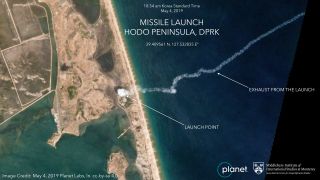 North Korea is back at it.

The rogue nation conducted its first missile test in 18 months early Saturday morning (May 4), launching a short-range vehicle east into the Pacific Ocean.

An Earth-observing Dove satellite built by San Francisco-based company Planet Labs happened to be overhead shortly after the launch and captured a stunning shot of the missile's curving, wind-whipped smoke trail.

"North Korean missile trail from space! Damn improbable; but if we take >million images/day, we’ll get one-in-a-million shots!" Planet Labs co-founder and CEO Will Marshall said via Twitter yesterday (May 5).

Planet Lab’s Dove cubesats are smaller than a loaf of bread but can capture imagery with a resolution of 10 feet to 16.5 feet (3 to 5 meters). The company currently has more than 100 operational Doves in low-Earth orbit.

Projectiles associated with the North Korean test traveled between 44 miles and 149 miles (70 to 240 kilometers) before splashing down in the Pacific, the Associated Press reported, citing South Korean military officials.

The newly tested craft appears to be based on Russia's 9K720 Iskander, a mobile, short-range ballistic missile, the AP reported. The Iskander can carry a nuclear weapon and has a range of about 310 miles (500 km).

The last missile that North Korea tested was a very different kind of vehicle. In November 2017, the nation launched an intercontinental ballistic missile (ICBM), which splashed down in the Pacific about 620 miles (1,000 km) away after 54 minutes of flight.

Details of that flight suggest that the ICBM has a range of more than 8,100 miles (13,000 km), experts said at the time. If that's the case, the missile could theoretically reach the U.S. East Coast.

The international community has imposed multiple rounds of sanctions on North Korea over the nation's pursuit of ICBM and nuclear-weapons technology — penalties that North Korean leader Kim Jong Un wants lightened or lifted. In meetings with U.S. officials since that November 2017 test, Kim has said he won't perform any more ICBM or nuclear tests.

Saturday's missile launch doesn't violate that promise. But it seems to signal that Kim is dissatisfied with the state of negotiations and may be planning more dramatic signs of protest, experts said.

"This is a pretty classic move from them to start small and work their way up," Jeffrey Lewis, director of the East Asia Nonproliferation Program at the Middlebury Institute of International Studies in Monterey, California, told CNN. "It's a warning that there's more to come."