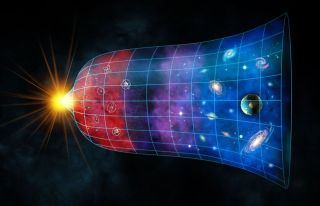 An artist's depiction of the history of the universe.
(Image: © Shutterstock)

The Nobel Prize in physics has been awarded to three scientists for unraveling the structure and history of the universe and for changing our perspective of Earth's place in it.

Canadian-American James Peebles of Princeton University received one-half of the Nobel "for theoretical discoveries in physical cosmology," the Royal Swedish Academy of Sciences said this morning. The other half will be shared by Swiss scientists, Michel Mayor and Didier Queloz, "for the discovery of an exoplanet orbiting a solar-type star," the Academy said. Mayor is a professor at the University of Geneva in Switzerland, and Queloz is at both the University of Geneva and the University of Cambridge in the U.K.

Peebles was key in transforming the field of cosmology — the study of the universe's origin and evolution — from one of speculation to actual science, according to the Nobel Prize organization. His research led to the revelation that just 5% of the universe is normal matter and energy, while about 95% is invisible stuff that physicists call dark matter and dark energy.

Mayor and Queloz announced the first discovery of an exoplanet, or a planet outside our solar system, orbiting a sun-like star in October 1995. Using custom-made instruments at the Haute-Provence Observatory in southern France, the duo was able to see 51 Pegasi b, a gas giant comparable to Jupiter, according to the Nobel Prize organization.

"This discovery started a revolution in astronomy and over 4,000 exoplanets have since been found in the Milky Way," the Nobel Prize organization said.

Peebles will receive half of the 9 million kronor (about $909,000) Nobel prize, while Mayor and Queloz will split the other half.