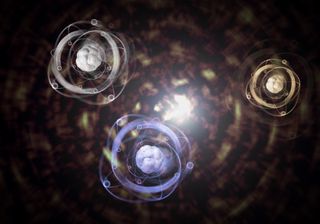 Transmuting one element into another (usually gold, of course) was the stuff of fevered dreams and fanciful imaginations for alchemists way back in the day. It turns out that nature does it all the time without any help from us — though not usually into gold.

This natural alchemy, called radioactivity, happens when an element decays and in doing so transforms into another element.

By studying some of the rarest decays, we can get a hint of some of the most fundamental of physics — physics so fundamental, it might just be beyond our current understanding. [The 18 Biggest Unsolved Mysteries in Physics]

One of these elusive radioactive decays has never actually been seen, but physicists are really hoping to find it. Called neutrinoless double-beta decay, it would mean radioactive elements spit out two electrons and nothing else (not even ghostly, chargeless, barely-there particles known as neutrinos). If physicists manage to spot this decay in the real world, it would violate one of the fundamental rules of physics and fuel a race to find new ones.

But bad news for fans of neutrinoless double-beta decay: One of the longest-running experiments recently published results showing no hint of this process, meaning that if this unicorn process does occur, it's incredibly rare. And the only answer we have right now is to keep digging, keeping our fingers crossed.

To understand the importance of neutrinoless double-beta decay, we have to go back more than a century, to the late 1800s, to understand what radioactive decay is in the first place. It was the singularly skillful Ernest Rutherford who figured out that there were three different kinds of decays, which he called alpha, beta and gamma (because why not).

Each of these decays led to a different sort of emission of energy, and Rutherford found that the so-called "beta rays" could travel quite a ways through some metal sheets before stopping. Later experiments revealed the nature of these rays: They were just electrons. So some chemical elements (say, cesium) were transforming themselves into other elements (say, barium), and in the process they were spitting out electrons. What gives? [6 Important Elements You've Never Heard Of]

The answer wouldn't come for another few decades, after we figured out what elements are made of (tiny particles called protons and neutrons), what protons and neutrons are made of (even tinier particles called quarks) and how these entities talk to each other inside atoms (the strong and weak nuclear forces). We learned that, on a whim, a neutron can one day decide to become a proton and, in the process, emit an electron (the once-named beta rays). Because the neutron changed into a proton, and the number of protons determines what kind of element you are, we can almost magically get elements transforming into others.

To make this transformation happen, the neutron has to change its internal structure, and its internal structure is made of smaller characters called quarks. In particular, a neutron has one "up" quark and two "down" quarks while a proton has the reverse — a single "down" quark and a pair of "up" quarks. So to change one kind of element into another — and make beta radiation, along the way — we need to flip one of these quarks from down to up, and there's only one force in the universe capable of making that happen: the weak nuclear force. [7 Strange Facts About Quarks]

But physical reactions are all about balance. Take, for instance, the electric charge. Let's imagine we started with a single neutron — neutral, of course. At the end we get a proton, which is positively charged. That's a no-no, and so something need to balance it out: the negatively charged electron.

And there's another balancing act needed: the total number of leptons must stay the same. Lepton is just a fancy name for some of the tiniest particles, like electrons, and the fancy term for this balancing act is "lepton number conservation." As with the electric charge, we have to balance the beginning and ending of the story. In this case, we start with zero leptons but end with one: the electron.

What balances it? Another new particle is created in the reaction, an antineutrino, which counts as a negative, balancing everything out.

Who needs a neutrino?

Here's the twist: There may be a kind of beta decay that doesn't require a neutrino at all. But wouldn't that violate this all-important lepton number conservation? Why, yes, it would, and it would be awesome.

Sometimes two beta decays can happen at once, but it's basically two regular beta decays happening simultaneously within the same atom, which while rare isn't all that interesting, spitting out two electrons and two antineutrinos. But there's a hypothetical double beta decay that emits no neutrinos. This kind only works if the neutrino is its own antiparticle, which means that the neutrino and the antineutrino are the exact same thing. And at our current level of knowledge of all things particles, we honestly don't know if the neutrino behaves this way or not.

It's a little hard to describe the exact internal process in this so-called neutrinoless double-beta decay, but you can imagine the produced neutrinos interacting with themselves before escaping the reaction. With no neutrinos, this hypothetical reaction cranks out two electrons and nothing else, hence violating lepton-number conservation, which would break known physics, which would be very exciting. Hence, the hunt is on to detect something like this, because the first group to do it is guaranteed a Nobel Prize. Over the decades many experiments have come and gone with little luck, meaning that if this process exists in nature it must be very, very rare.

How rare? In a recent paper, the team behind Advanced Molybdenum-based Rare process Experiment (AMoRE) released their first results. This experiment searches for neutrinoless double-beta decay using, you guessed it, a lot of molybdenum. And guess what? That's right, they didn't see any decays. Given the size of their experiment and the length of time they've been recording, they estimate that the double-beta decays occur with a half life of no less than 10^23 years, which is more than a trillion times the current age of the universe.

What does that mean? It means that if we want to find new physics in this direction, we're going to have to keep digging and keep watching a whole lot more decays.