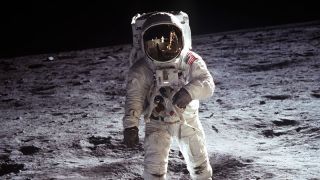 Astronaut Buzz Aldrin on the surface of the moon, an image that is included in the book "Space Atlas, Second Edition: Mapping the Universe and Beyond."
(Image: © NASA)

The universe is as amazingly vast as it is endlessly fascinating. From the hydrocarbon lakes on Saturn's moon Titan to the violent stellar explosions that shape solar systems and galaxies, we are surrounded by the strange and incredible. In the book "Space Atlas, Second Edition: Mapping the Universe and Beyond" (National Geographic, 2018), author James Trefil explores some of the most interesting processes and bodies of our solar system, and the universe at large.

The book is the follow-up to Trefil's first edition with National Geographic, which came out in 2012. And, just like the first edition, this book features a foreword by former NASA astronaut Buzz Aldrin, who, as one of the few human beings to ever step foot on the lunar surface, knows more than most about life off planet Earth.

Aldrin writes: "There is power displayed in this book's pages of stunning images, maps, and mind-opening text. Presented here is a grand tour of time and space and the information gleaned by horizon hunting — a restlessness and hunger for new awareness and appreciation about the cosmos." [The History & Structure of the Universe (Infographic)]

This book, or universe map, was released as part of National Geographic's campaign "Starstruck: National Geographic's Yearlong Celebration of Space." With "Starstruck," which leads up to the 50th anniversary of the Apollo moon landing this summer, National Geographic aims to inspire people to look up. And with this book, Trefil succeeds in leaving the reader awestruck. While the first edition of the book gave readers a tour of the universe, this edition dives into details that we've only recently discovered. Our understanding of the universe and its processes is ever-evolving, and this book reflects this evolution.

Trefil begins the book close to home in our own solar system, starting with planets, moons and the sun. The book goes in-depth in describing the birth of our solar system, and the various missions that have launched from Earth to explore its many features.

From the dusty-red canyons of Mars to the swirling clouds of Jupiter, Trefil leaves no stone unturned in the solar system. Trefil's words are accompanied by a slew of fantastic and stunning images of our planetary neighbors. But the book goes beyond just the objects that orbit our sun. Past our solar system, the book covers exoplanets, black holes and the search for life out in the universe.

If you're captivated by what you know of the universe and want to explore its features a bit further, this book is sure to inform you as well as capture your imagination. What might life be like for humans on Mars? Is there really life out in the universe, and will we ever find it? What do lakes on a faraway moon look like? This book will answer many of the questions you might have about the universe — while introducing images and details about the universe that are sure to thrill.

This book can be found on Amazon.com.