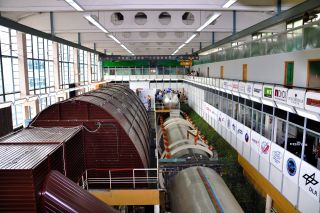 The social isolation experiment facility at the the Institute for Biomedical Problems in Moscow, Russia.
(Image: © ESA)

Do you thrive in social isolation? NASA is looking for people to spend 8 months locked in a Russian lab for a new experiment.

When humans return to the moon and travel to Mars, they will need to be prepared for long-duration space travel and even longer stays on these far-off destinations. Currently, NASA's Artemis program aims to land humans on the moon for the first time since NASA's Apollo 17 mission landed in 1972.

While the moon is the main goal of NASA's Artemis program, the agency's larger goal is to send crewed missions to Mars. But long-term space travel and habitation won't be easy. Such missions will present both physical and mental challenges as astronauts work to not only survive, but perform important scientific research in uniquely difficult environments.

Related: Life on Mars: Inside the HI-SEAS isolation habitat

In the upcoming NASA-Russia experiment, which builds on a previous four-month-long study from 2019, a crew will live in isolation in a closed facility at Russia's Institute for Biomedical Problems, which is in Moscow, NASA officials said in a statement. This habitat facility was used in 2011 for a notable series of Russian mock Mars missions known as Mars500. During these missions, crews spent 520 and 105 days (on two separate missions) in the facility.

Participants that join the experiment's crew will spend 8 months inside of a closed facility that, according to the statement will have "environmental aspects similar to those astronauts are expected to experience on future missions to Mars."

The crew will spend these months living together in isolation and working on scientific research. They will even virtually conduct experiments that future astronauts might be expected to perform on locations like the lunar surface.

So why is NASA looking to lock people in isolation?

By living and working in this Mars base-like environment, participants in this study will help NASA researchers to better understand the psychological and physiological effects of isolation, according to a NASA statement.

This will be a type of analog mission,  a crewed mission on Earth but which mimics the environment or living conditions expected at a place like the moon or Mars. These missions help researchers to not only perform relevant science experiments but also to see how people might fare under strange conditions for extended periods of time.

Now, currently, because of concerns surrounding the coronavirus pandemic, a large number of people around the world are living in social isolation or some form of quarantine that is vastly different from their typical day-to-day living arrangement.

So, if you're finding that living in social isolation works for you, you might be particularly well-suited for living in a Mars-like environment and this could be for you. But first, you have to qualify.

NASA's  looking for "highly motivated" U.S. citizens between the ages of 30-55, according to the statement. Candidates must speak both Russian and English proficiently and have an M.S., PhD., M.D. or military officer training. applicants with a Bachelor's degree or other relevant experience may also be considered, the agency said.

Those who are chosen to be a part of this crew will be compensated for their work. "There are different levels of compensation depending upon whether or not you are associated with NASA or if you are a NASA employee or contractor," NASA said in the statement.

For more information on NASA's upcoming Mars analog experiment, including how to apply, visit the agency's website here.