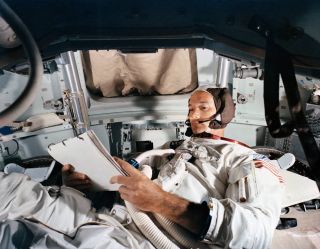 One month from today will mark the 50th anniversary of humanity's first steps on the moon — but 50 years ago today, NASA still had plenty of work to do to make the Apollo 11 mission a success.

In the beginning of the month, on June 3, Neil A. Armstrong, Edwin "Buzz" Aldrin and Michael Collins met with the astronauts who had flown on Apollo 10: Thomas P. Stafford, Eugene A. Cernan and John W. Young. Because Apollo 10 was a "dress rehearsal" for the moon-landing mission, the trio of astronauts were the obvious people to consult before the launch. A couple of days later, Aldrin and Armstrong got some extra practice when they completed a simulation of the Extravehicular Activity (EVA) they would conduct on the moon.

On June 11, Apollo 11's mission was finally set when Lt. Gen. Sam C. Phillips, the Apollo program director at NASA, formally announced that NASA intended to land on the moon a month later, assuming all preflight activities went smoothly. As the days went on, the astronauts continued to train and the vast supporting staff at NASA worked tirelessly to ensure the mission's success and the safety of the crew.

Between June 14 and 16, Armstrong completed eight flights with the Lunar Landing Training Vehicle, which finished his training with the craft. (He had completed 12 simulated moon landings in the vehicle and its predecessor in previous months.)

Also on June 16, the astronauts simulated the arrival of the Mobile Quarantine Facility, an Airstream trailer that would house the returning crew members in isolation to ensure they didn't bring back any infections from the moon.

The next day, June 17, leaders across the agency gathered at Kennedy Space Center for the Flight Readiness Review. The review covered all aspects of the launch and mission to determine if they were ready to move forward to the Countdown Demonstration Test, a dry-run for the launch countdown. The review went well, and the test was completed in early July.

Meanwhile, the astronauts continued to train, including Armstrong and Aldrin rehearsing their lunar surface EVA.

By this time in 1969, NASA had not only made it clear that the agency intended to land these astronauts on the moon in July, but personnel had also completed just about all of the necessary steps to make it happen.

The month leading up to Apollo 11's success highlighted just how many people were involved in the mission. In fact, over 400,000, close to half a million people worked behind the scenes on just the Apollo 11 mission alone. From engineers to "human computers,” which included the three African-American women featured in the book and film "Hidden Figures," to scientists, administrators, cleaning crews and so many more, it took an enormous collaborative effort to actually complete this seemingly impossible task.

That work paid off on July 20, 1969, when an estimated 600 million people around the globe sat, glued to their television sets to watch the crew's historic first steps on the moon.