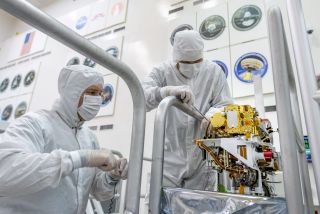 In preparation for its upcoming mission to the Red Planet, the Mars 2020 rover got a couple of new handy tools.

NASA engineers recently installed an autopilot navigation unit, a new camera and a robotic arm on the rover to help it land and collect and identify samples from Mars. The rover will look for signs of a habitable environment on the Martian surface and store samples that a future mission will bring back to Earth.

The Terrain-Relative Navigation (TRN), the rover's new autopilot navigation tool, will help Mars 2020 avoid hazards during its landing on the Martian surface, according to a statement by NASA.

"What we needed was a Neil Armstrong for Mars," Al Chen, entry, descent and landing lead for NASA's Mars 2020 mission at the Jet Propulsion Laboratory in California, said in the statement, referring to Armstrong's decision to manually steer the Apollo 11 lander to the surface 50 years ago.

The Mars 2020 rover now has a map of hazardous sites at Jezero Crater, where the spacecraft is set to land. The navigation unit will steer Mars 2020 toward the safest landing spot as the rover approaches. Jezero Crater is NASA's most challenging landing site yet on Mars, as the 28-mile-wide (45 kilometers) indentation has steep cliff sides, sand dunes, boulder fields and small impact craters, NASA said.

"Jezero is where our scientists want to be," said Chen. "And without TRN, the odds of successful landing at a good location for the rover are approximately 85%. With TRN, we feel confident we are up around 99%."

After landing, the Mars 2020 rover will use its newly installed SuperCam Mast Unit to identify the chemical and mineral composition of its targets, employing the SuperCam's  camera, laser and spectrometers, according to a statement by NASA.

"SuperCam's rock-zapping laser allows scientists to analyze the chemical composition of its targets," Soren Madsen, the payload-development manager at the Jet Propulsion Laboratory in California, said in the statement. "It lets the Mars 2020 rover conduct its cutting-edge science from a distance."

The rover also got a handy new part: a robotic arm that will allow Mars 2020 to operate like a human geologist on Mars. Five electrical motors and five joints sit along the 7-foot-long (2.1 meters) arm, so the rover will be able to hold and use science tools with its hand, according to a statement by NASA.

The rover's new arm will be essential in collecting and analyzing the samples of Martian rock and soil that a future mission will return to Earth, said NASA.

Mars 2020 rover is scheduled to launch from Cape Canaveral Air Force Station in Florida in July of next year and will land on Mars in February 2021.