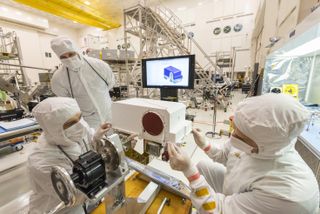 Engineers at NASA's Jet Propulsion Laboratory prepare the Mars 2020 rover for its launch next summer with the installation of the remote-sensing masthead and integration of two Mastcam-Z high-definition cameras.
(Image: © NASA/JPL-Caltech)

NASA's next Mars rover gets one step closer to its launch next summer with the installation of a pair of high-definition cameras.

The Mars 2020 rover is scheduled to launch in July 2020. The mission will land on the Red Planet's Jezero Crater on Feb. 18, 2021, where it will begin its search for signs of habitable environments and evidence of past microbial life.

On May 23, engineers at NASA's Jet Propulsion Laboratory in Pasadena, California, reinstalled the cover to the rover's remote sensing masthead, which carries important optics and instrumentation. This set the stage for the installation of the two Mastcam-Z high-definition cameras, which will be placed on the rover's deck this week, according to a statement from NASA.

The two Mastcam-Z cameras are designed to boost the rover's driving and core-sampling capabilities. The instrument will provide a detailed look at rocks and sediment within the rover's field of view, offering a more comprehensive picture of the planet's geologic history, according to the statement.

"Mastcam-Z will be the first Mars color camera that can zoom, enabling 3D images at unprecedented resolution," Jim Bell, Mastcam-Z principal investigator of Arizona State University, said in the statement. "With a resolution of three-hundredths of an inch [0.8 millimeters] in front of the rover and less than one-and-a-half inches [38 millimeters] from over 330 feet [100 meters] away — Mastcam-Z images will play a key role in selecting the best possible samples to return from Jezero Crater."

The Mars 2020 will also be equipped with a Lander Vision System, making it the first spacecraft with the ability to accurately retarget its touchdown during the landing sequence. The rover also has a caching system, which can be used to collect Martian rock and soil samples that can be returned to Earth with a future mission.