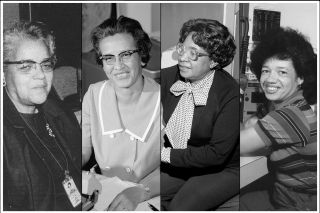 Four of NASA's "hidden figures," together with all of the women who contributed to the agency's success in the space race to the moon, will be honored with the Congressional Gold Medal, one of the highest civilian awards in the United States.

"This is an exciting opportunity to honor the pioneering generation of female mathematicians for their commitment and service to NASA and to our country," said Margot Lee Shetterly, author of "Hidden Figures: The American Dream and the Untold Story of the Black Women Mathematicians Who Helped Win the Space Race," in a statement issued by the House after the act passed in September. "The women who did this work came from across our country and each of their hometowns should embrace them as heroes."

Shetterly's book served as the basis for the 2016 feature film "Hidden Figures," which dramatized the experiences of Johnson, Vaughan and Jackson.

Johnson calculated trajectories for NASA's early human spaceflights, including the suborbital launch of the first American astronaut, Alan Shepard on his 1961 Mercury mission, and the first flight of a U.S. astronaut into Earth orbit, John Glenn on his 1962 Friendship 7 mission. Working with the Space Task Group, Johnson became the first woman in NASA's flight research division to receive credit as an author of a research report. She is today 101.

Vaughan led the West Area Computing unit at what is now the Langley Research Center in Virginia, becoming the first African American supervisor at the National Advisory Committee for Aeronautics (NACA), the predecessor agency to NASA. She later became a leading computer programmer as a part of the space agency's analysis and computation division. Vaughan died in 2008 at the age of 98.

Jackson was the first African American woman engineer at NASA. Later in her career, she worked to improve the prospects of NASA's female mathematicians, engineers and scientists as Langley's Federal Women's Program manager. She died in 2005 at the age of 83.

Darden, who became an engineer at NASA 16 years after Jackson, wrote over 50 articles on aeronautics design and was the first African American of any gender to be promoted into the Senior Executive Service at Langley. She is 77 today.

The Hidden Figures Congressional Gold Medal Act directs that Vaughan's medal be provided to the Smithsonian for display at the National Museum of African American History and Culture. Jackson's is to be presented to her granddaughter, Wanda Jackson.

"Katherine Johnson, Dr. Christine Darden, Dorothy Vaughan, Mary Jackson, and all the women of NASA during [their] time were pioneers," said Rep. Eddie Bernice Johnson, chair of the House Science Committee. "In spite of the challenges these women faced, they chose to apply their considerable talents to help land the first man on the moon. The success of the NASA space program is due in large part to their brilliance, hard work, and perseverance in the face of adversity."

The Congressional Gold Medal is awarded to individuals whose achievements have had an impact on U.S. history that is likely to be recognized in the recipient's field for years to come. First bestowed to George Washington in 1776, only five other individuals involved in space exploration have been awarded to date: rocket pioneer Robert Goddard in 1959 and astronauts John Glenn, Neil Armstrong, Buzz Aldrin and Michael Collins in 2011.

As directed by the newly-signed law, the Secretary of the Treasury will determine the design for each of the Hidden Figures gold medals. Duplicates of the medals may also be produced in bronze for sale to the public.