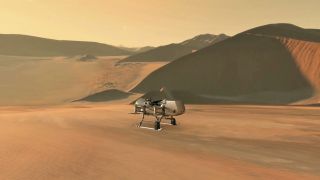 This illustration shows NASA’s Dragonfly rotorcraft-lander approaching a site on Saturn’s moon, Titan. Taking advantage of Titan’s dense atmosphere and low gravity, Dragonfly will explore dozens of locations across the icy world, sampling and measuring the compositions of Titan's organic surface materials to characterize the habitability of Titan’s environment and investigate the progression of prebiotic chemistry.
(Image: © NASA/JHU-APL)

Drones have already conquered Earth, and now they're heading out into the solar system.

NASA announced yesterday (June 27) that it will launch a life-hunting rotorcraft called Dragonfly toward Saturn's huge moon Titan in 2026. If all goes according to plan, Dragonfly will land on the hazy, frigid satellite in 2034 and then spend several years flying around, gathering a variety of data and snapping amazing photos of the exotic landscape.

But Dragonfly won't be the first drone to ply alien skies. A tiny helicopter scout will accompany NASA's Mars 2020 rover mission, which is scheduled to launch toward the Red Planet next summer and land in February 2021.

The Mars Helicopter and Dragonfly are very difficult vehicles with very different jobs. The Red Planet chopper is a stripped-down technology demonstration that weighs a mere 4 lbs. (1.8 kilograms) and carries no scientific instruments, whereas the eight-bladed Titan probe will be 10 feet (3 meters) long, carry a suite of sensitive scientific gear and have a total price tag of about $1 billion.

And they'll explore very different worlds. For example, Mars' atmosphere is just 1% as thick as that of Earth and is dominated by carbon dioxide; Titan's air is 400 times thicker than Mars' and is mostly nitrogen (like Earth's atmosphere).

Still, there could be room and reason for the two missions to work together, said Dragonfly principal investigator Elizabeth Turtle, of Johns Hopkins University’s Applied Physics Laboratory in Laurel, Maryland.

"There may well be some commonalities that we can leverage between the systems," Turtle said yesterday during a telecon with reporters. "And we were very excited to see the Mars Helicopter selected to fly, and rotorcraft on multiple planets."

Flying around on an alien world will definitely be challenging, she added. But it's not a crazy idea, given that the core technology involved — highly autonomous rotorcraft — is very mature here on Earth.

"We think what we're doing with Dragonfly is innovation, not invention," Turtle said. "We're applying technologies that already exist to another planet."

And Dragonfly and the Mars Helicopter may be just the beginning. If the two drones perform well, rotorcraft could soon begin leaving Earth in relatively large numbers.

"We envision helicopters opening doors to new types of exploration on Mars," Håvard Grip, flight-control and aerodynamics lead for the Mars Helicopter, said in March during a presentation with NASA's Future In-Space Operations (FISO) working group.

"In the future, we could imagine doing things like [engaging in] regional exploration using multiple helicopters or going to inaccessible areas or biologically sensitive areas using small helicopters," added Grip, who is based at NASA's Jet Propulsion Laboratory and the California Institute of Technology, which are both in Pasadena.

There are other ways to explore alien skies as well. For example, the Soviet Union's Vega 1 and Vega 2 probes deployed uncrewed balloons into Venus' atmosphere in 1985. And NASA scientists have been developing a concept that would send piloted airships cruising through those same skies.

This latter project, called the High Altitude Venus Operational Concept (HAVOC), is just an idea at the moment. It's not on NASA's books, or you definitely would've heard more about it.