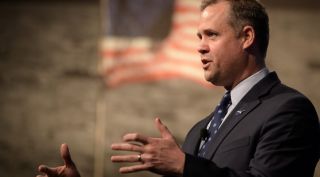 WASHINGTON — NASA Administrator Jim Bridenstine said he reassigned the agency’s human spaceflight head, Bill Gerstenmaier, because time was limited to address cost and schedule issues with the agency's key exploration programs and still meet a 2024 deadline for returning humans to the moon.

In an interview with reporters from SpaceNews and The Washington Post for C-SPAN's "Newsmakers" program July 12, Bridenstine also questioned whether commercial crew companies will be able to launch astronauts to the International Space Station by the end of this year.

The interview came two days after Bridenstine said he had reassigned Gerstenmaier, the associate administrator for human exploration and operations, and Bill Hill, deputy associate administrator for exploration systems development, to "special advisor" positions. The announcement took many by surprise, particularly since Gerstenmaier was held in high regard throughout the space industry.

Related: How NASA's Apollo Astronauts Went to the Moon

"We're moving to a new era in human spaceflight where the administration is interested in going fast, we're interested in doing things in a different way, and I believed it was important to have new leadership at the top of the Human Exploration and Operations Mission Directorate," he said. "I just thought it was important to make this decision, make this change at this time."

Bridenstine praised Gerstenmaier, who started at NASA in 1977 and had been associate administrator for human exploration and operations since NASA established that directorate in 2011. "He is a great American. He is a great patriot. He has served NASA for 42 years, and we love him," he said. Bridenstine added that reassigning Gerstenmaier was "entirely my decision."

Bridenstine said he decided to reassign Gerstenmaier and Hill now, on the eve of celebrations of the 50th anniversary of Apollo 11, because of the schedule pressures created by the administration's goal of landing humans on the moon by 2024. "We don't have a "lot of time to waste. If we're going to have new leadership, it needs to happen now, he said. "We need to move out quickly on all of our decisions."

Replacing Gerstenmaier on an interim basis is his deputy, former astronaut Ken Bowersox. Bridenstine said in a July 11 memo he plans to undertake a "nationwide search" to find someone to take the job on permanently, who would then hire two deputies, one for exploration systems like the Space Launch System and Orion and the other a new deputy associate administrator responsible for efforts like Gateway and lunar landers.

"We're looking for three total individuals to create that top team" in the directorate, he said. "We will be looking for them to look at the programs and come up with their own baseline schedules and costs, and then ultimately have them execute to those baselines."

Bridenstine suggested that it will be up to that new leadership team in the mission directorate to make key decisions on reining in cost and schedule issues with those programs, in particular the core stage of the SLS. Delays in the development of that core stage led Bridenstine to suggest in March that NASA could shorten or even skip a “green run” test of the core stage, where its four engines will be fired on a test stand at the Stennis Space Center for eight minutes. That proposal has faced criticism from some members of Congress as well as NASA’s own Aerospace Safety Advisory Panel.

Bridenstine said that the agency has not decided about any changes to the green run. "I want to make sure we get those top people in place and then let them look at the program," he said. "Ultimately we'll let them make the determination of what tests needs to be done." He added, though, that he expected that some form of the test would take place, "but how much of a green run do we need to do is the question."

"The key is this: we want to make sure, number one, our astronauts are safe, and number two, we are committed to cost and schedule," he said.

The shakeup in leadership in NASA’s exploration programs comes as the agency is trying to make the case to Congress for billions in additional funding for the Artemis program. In an interview with CNN in June, Bridenstine estimated that it would cost $20–30 billion above the agency’s previous budget projections to achieve the goal of landing humans on the moon by 2024.

"The challenge is political, for sure, but it's not partisan: it’s not Republican or Democrat. It’s largely parochial," he said. He cited the support from the administration in the form of a budget amendment, seeking an additional $1.6 billion for the agency in fiscal year 2020 to work on lunar landers, SLS and other efforts related to Artemis.

He acknowledged the $20–30 billion cost estimate, but suggested international and commercial partnerships could help reduce those costs. "What we're learning is that there are other people that want to contribute to this," he said. "They want to invest their own money. Why? Because they want customers that are not NASA. If they have customers that are not NASA, it drives down our costs."

"It's very realistic that it could come in well under the $20 billion when I gave that original range," he said, which he said assumed NASA alone would pay for the cost of the program.

NASA has yet to secure that $1.6 billion down payment for Artemis in 2020. A House appropriations bill passed in June did not include that funding, instead increasing spending for other agency programs, like science. Bridenstine said that the House’s action was not surprising, since the budget amendment was released the same week as House appropriators marked up their bill.

The lack of House funding, he argued, was not evidence of a lack of support for Artemis. "I've talked to people on both sides of the aisle that are, in fact, very, very supportive,” he said. "The challenge is they just didn't have the time."

He said he hopes the Senate will act on the budget amendment, and that the additional funding for Artemis can be retained when the House and Senate reconcile their differing bills in a conference committee. "The process has only just begun. I'm confident that it can be achieved."

One area of concern, though, is that the 2020 fiscal year is likely to start on a continuing resolution (CR), as has been the case throughout recent history. Continuing resolutions, which fund agencies at levels of the previous fiscal year, restrict the ability to start new programs unless they're formally authorized through an "anomaly" to the CR.

"If that happens," Bridenstine said, "we need to look at how NASA can move forward in some kind of anomaly."

Another key issue for NASA is its commercial crew program, where Boeing and SpaceX are developing vehicles designed to carry NASA astronauts to and from the International Space Station, ending reliance on the Russian Soyuz spacecraft. Both companies, though, have suffered extensive delays, and Bridenstine hinted in the interview that the companies may not be ready to carry astronauts before the end of the year, as had been planned.

"I don't want to comment on whether or not we're going to get that flight complete this year," he said. "I honestly don't know at this point."

That comment was far less confident than what Bridenstine said two days earlier, speaking at the Future Space 2019 conference here, when he mentioned SpaceX's uncrewed test flight of its Crew Dragon spacecraft in March. "That's a monumental achievement. It demonstrates a commitment for a very long period of time to returning American astronauts to space from American soil on American rockets. We're going to do that this year."

"We are moving rapidly to make these missions a reality," he said in the interview, noting it was still possible crewed test flights could launch this year. "I want to make sure that, before I go forward with what that launch date will be, that we know for sure that these vehicles are going to be safe."

SpaceX suffered the loss of that Crew Dragon spacecraft in April during preparations for an in-flight abort test. Both the company and the agency faced criticism for the lack of openness in the ongoing investigation into that incident, and Bridenstine vowed that the process will work differently in the future.

"That criticism largely comes from me as well," he said, noting there was "no communication” from SpaceX immediately after the accident. "That can't happen again."

Bridenstine said that a new process is now in place for communications in the event of another mishap. "Within a couple of hours, we're going to do a press conference and get as much information out to the public as soon as possible."

Updating schedules for commercial crew test flights, Bridenstine suggested, will be another task for the new leadership of the Human Exploration and Operations Mission Directorate as it deals with overall cost and schedule issues. "We are committed to commercial crew. We need to make it a go," he said.