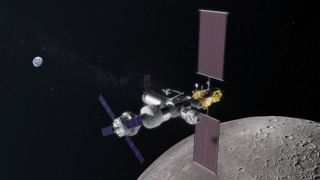 Staff members supporting the House Committee on Science, Space and Technology and the Senate Committee on Commerce, Science and Transportation spoke about each legislature's bill on Jan. 30 at the 23rd annual Commercial Space Transportation Conference. Neither bill allocates money; instead, they outline a vision for NASA policy.

The House bill, which was introduced on Jan. 24, centers NASA's Mars exploration goals, targeting a human landing in 2033, and directs the agency to trim down its lunar exploration plans. This legislation removes the mandate for NASA to land humans on the moon in 2024, reinstating the previous deadline of 2028, although permitting NASA to move faster should that be safe. Any lunar activities, the bill says, should be directly related to preparing NASA to send humans to Mars.

The bill does not "preclude activities related to Artemis," NASA's lunar exploration program, Pam Whitney, a Democratic professional staffer for the House Committee on Science, Space and Technology, said during the panel. The bill "focuses on a path from the moon to Mars and [ensures] that everything in the program [builds] on what is necessary to get to Mars," she said

Her colleague Tom Hammond, senior policy advisor for space and aeronautics, echoed the statement, further emphasizing that Mars has been in multiple administration's sights, stretching back at least to NASA authorizations from 2009.

"[The bill is] the most forward-leaning on authorizing Gateway, authorizing landers, authorizing transport vehicles for future Mars exploration," Hammond said. Gateway is the NASA concept of a home base in lunar orbit for humans traveling to and from the moon. But in the House's version of the bill, Gateway would instead serve as a test bed for Mars technologies.

Neither House committee staff member addressed the most contentious part of the bill, which directs NASA to take ownership of developing landers to shuttle humans between Gateway and the moon. That's in direct contrast to the agency's plans to solicit the private sector to lead the creation of these vehicles. (The House committee did not respond to a request for comment about this directive.)

"I am concerned that the bill imposes some significant constraints on our approach to lunar exploration," NASA Administrator Jim Bridenstine wrote in a blog post responding to the House bill. "Without the dynamic participation of commercial partners, our chances of creating a sustainable exploration program are significantly diminished."

However, Whitney said that the "bill has explicit language directing NASA to use commercial logistic services to the maximum extent practical and also authorizes the commercial lunar payload services program, commercial cargo and commercial crew."

Joel Graham, a professional staff member on the Senate committee who also spoke during the panel, said that "we fully support the goal of getting to Mars eventually.

"NASA is working on things that will help us live and work on the Red Planet someday," Graham said. However, "we just don't have the ability to put people in the spacecraft and send them to Mars." That's why, he said, the Senate bill wants to keep NASA's focus on "our national goals, our national priorities right now," which should be sending humans to the moon for extensive missions in order to prepare them for a life on Mars, the Senate's science committee believes.

However, both authorization bills agree on one thing: NASA doesn't need to land humans on the moon until 2028.

"We had several hearings with Administrator Bridenstine and asked to see the full budget request for Artemis, but he said that wouldn't be coming until February this year," Alicia Brown, a professional staffer for the Senate committee, said during the panel. "We're looking forward to seeing that so that we can really understand what [a 2024 landing] is going to take."