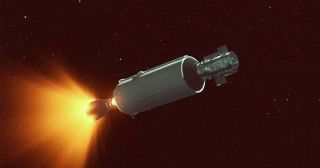 Nanoracks wants to expand from hosting experiments on board the International Space Station to running its own miniature stations built from used rockets, with a first launch scheduled for next year.

The company has arranged two launch eight cubesats and a space habitat construction experiment on a SpaceX Falcon 9 rocket in late 2020, according to a Nanoracks statement released Monday (Nov. 18). The launch, in partnership with Maxar, will be the company's first demonstration mission for its Outpost project, and will cut material that mimics a used second-stage rocket while in space. That's the first step in turning such equipment into a space station that Nanoracks can then commercialize, according to the company.

"Structural metal cutting has never been done in space, and SpaceX is honored to help deliver a demonstration of this capability to orbit," Gwynne Shotwell, president and chief operating officer of SpaceX, said in the statement. "It’s promising to see more companies like Nanoracks investing in new technologies to advance the exploration of the moon and, ultimately, Mars."

The demonstration is designed to slice the metal without producing any space junk. Such orbital debris is a real threat to existing and future satellites, which can be damaged or destroyed by collisions. Eventually, Nanoracks wants to turn used second-stage rockets into commercial space stations that could be headquarters for tourism, advertising, research and other opportunities.

Next year's test project relies on NASA funding. The agency wants to encourage private companies to develop an orbital economy. In June, NASA announced new opportunities for bringing commercial activities to the International Space Station, including hosting private astronauts for up to a month at a time. At the time, NASA also said that it was looking for ways to encourage companies to build independent space stations of their own.

One project targeting that goal is already in space; the Bigelow Expandable Activity Module arrived at the space station in 2016 to test technology for such free-flying space stations.