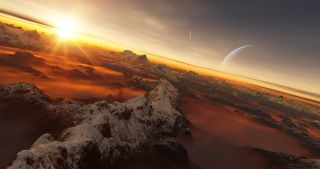 An artist's impression of the view from an alien world.
(Image: © IAU/L. Calçada)

There's a whole universe of nameless stars and exoplanets beyond our solar system, and now space fans around the world will have a chance to help name these objects.

As part of its 100th anniversary celebrating, the International Astronomical Union (IAU), a society of astronomers with the sole authority to name celestial objects, is giving every country on Earth the chance to name an exoplanet and the star it orbits. (The IAU also famously stripped Pluto of its planetary status in 2006.)

To name an exoplanet and its star, each participating country's local IAU outreach office (or a volunteer committee in countries that don't have one) must launch a national campaign to solicit name ideas from the public. After the committees down-select the candidates, winning names will be decided by means of a popular vote.

So far, nearly 100 countries are already organizing national campaigns to get members of the public to contribute ideas and vote for names to submit for the IAU100 NameExoWorlds project. You can find a list of those countries here. If your home country hasn't launched a naming campaign yet, you have until June 30 to get started by submitting a proposal to the IAU.

Once the votes are in, participating countries must submit their winning names to the IAU for approval in November, and the winning monikers will be announced in December. To be approved, each name must follow the IAU's naming rules.

Each country will be assigned a star that is visible in the night sky, at least through a small telescope. Unfortunately, it's extremely difficult to observe an exoplanet even with the best telescopes, so we may never find out what the newly named worlds look like.

"This exciting event invites everyone worldwide to think about their collective place in the universe, while stimulating creativity and global citizenship," Debra Elmegreen, IAU president-elect, said in a statement. "The NameExoWorlds initiative reminds us that we are all together under one sky."

This will be the second such contest held by the IAU; a similar campaign in 2015 led to the naming of 14 stars and 31 exoplanets.