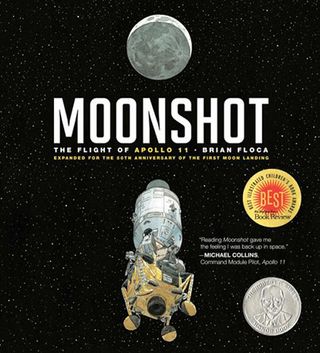 Moonshot takes its young readers on a journey to the moon and back.
(Image: © Simon & Schuster)

Fifty years ago, the Apollo 11 mission to the moon accomplished a major technical feat, one that was also filled with wonder and inspiration. And Brian Floca's new picture book, "Moonshot: The Flight of Apollo 11" (Atheneum/Richard Jackson Books, 2019), captures both aspects through beautiful illustrations. These pictures will guide young readers through everything they need to know about the moon landing, while taking them on a magical journey to the moon and back.

The first edition of the book was released in 2009, for the 40th anniversary of Apollo 11. With the 50th anniversary of the moon landing approaching, Floca expanded on the details of the mission itself and included some of the more diverse team members working on the ground to ensure the mission's success.

The book seamlessly transports readers between the two worlds, as the team of scientists, as well as the public, eagerly anticipates the astronauts' first steps on the moon.

Floca spoke to Space.com about illustrating the lunar landing and what he wanted to include in the second edition. Below are edited excerpts from the interview.

Space.com: What first inspired you to start working on the book?

Brian Floca: It's hard to pin it on just one thing. There's the skill and steadiness of the astronauts, the ingenuity of the people who planned the missions, the incredible machinery, and maybe most of all there's that view Apollo afforded us of ourselves — that beautiful and bracing image of the Earth, alone, in the emptiness of space.

Space.com: Why did you think that story was worth retelling in a children's book form?

Floca: The picture book is an incredibly rewarding way to tell a story, especially if you like to write and to draw. I'm tempted to say making one is like making a small movie, a movie you can hold in your hands — and there are some similarities. But in the end, it's really its own thing, its own space for storytelling, in which you try to get words and pictures and page turns all to work together to tell a story in a way it couldn't be told anywhere else. It's an especially exciting way to work when the story is as visual as the story of Apollo 11 — the rockets, the liftoff, the landing, the splashdown! And then there's so much in this story to fascinate young readers. I think the subject and the audience and the format are pretty near to a perfect fit for each other.

Floca: I started with a sense that I wanted the book to have an immediacy to it, an experiential quality that I hoped would make readers feel they were along for the journey. I also started [off] knowing I had a lot to learn about the mission in order to portray it accurately, and so as I was writing and sketching, I was constantly reading, watching documentaries and visiting museums. I spent much of the process going back and forth between the writing, drawing and research, trying to find the right balance of what to put in and what to leave out, how to integrate information without getting bogged down in it, and how to be accurate about it all. It felt, and still feels, like a privilege to spend time and to work with this material, and I wanted to do right by it and right by these people whose efforts and achievements I admire.

Space.com: What were you keen on including in the second edition?

Floca: In the original edition, the astronauts' time on the surface of the moon and their return from the moon were both handled in a very abbreviated fashion. And I was glad to have space in the new edition for a fuller treatment. So, in the expanded edition, there are some new small moments, such as [Neil] Armstrong and [Buzz] Aldrin back in the Eagle after their walk on the moon, trying to get some sleep (pretty unsuccessfully). And [there are] some new big moments, such as Eagle's lunar liftoff and Columbia's fiery reentry into Earth's atmosphere.

There was also room to acknowledge some of the 400,000 Americans who helped make Apollo 11 happen. I was happy about that, not least because I have a better sense now than I did 10 years ago of how diverse the Americans who worked on Apollo were, from the mathematicians so many of us read about and saw in "Hidden Figures" to the software designers, the spacesuit seamstresses, and on and on. During the flight, [Apollo 11 command module pilot] Michael Collins remarked, "This operation is somewhat like the periscope of a submarine. All you see is the three of us, but beneath the surface are thousands and thousands of others."

Space.com: How do you hope it inspires young readers?

Floca: I hope "Moonshot" is a book that will make readers want to know more about the Apollo program, make them want to read the next book, to talk to other people about it, to visit the nearest museum where they can see something of Apollo firsthand. I hope readers will find a sense of wonder in the book, some of what I feel when I look up at the moon and think about the fact people have reached it, people have been there. If readers come away with some of that, I'll be happy!